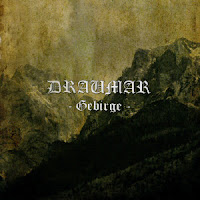 The biggest gripe I could launch against Draumar's Gebirge is that it's just too damn short, because music this beautiful, majestic and moving needs a lot of space to breathe, and once the 20 minutes of content has run its course I felt myself lost...salivating for more. Now, it's not as if this is being marketed as anything more than an EP, but the point stands that Draumar himself (the sole musician here) has such a firm, refined approach to this sort of ambient, martial/orchestral grandeur that I could probably sit through a solid 24 hour, Wagnerian epic with him at the steering wheel. Fans of outfits like Summoning, Lord Wind, Hellveto or the soothing, symphonic swells of German forebears Empyrium will devour this, and I'd even go so far as to recommend it to those into the martial scene or the better-produced dungeon synth artists.

It's not as raw as Summoning, per se, but the steadied, gradual result of Gebirge is much the same, a sense of rapture that captures and transports the listener into a world of olde. Layers of pianos, strings, flutes and choirs are arranged into simple but addictive patterns that are then tempered off against peaceful acoustic patterns. Add to this the sequences of blackened, minimal guitar chords that drift out over the gorgeous backdrop, and a rasp not unlike those implemented by Protector and Silenius, and you've got this corporeal, multidimensional sound both damning and delightful, whether you're sitting at the foot of a mountain dreaming of swords, sorcery and maidens or you're just emboldened to the angels or Valkyries you might imagine that ride through beams of sunlight piercing the cloudscape. I don't mean to paint a picture of Gebirge as some frivolous fairy-tale, because it genuinely reproduces such scenes of escapism with zero sense of irony; only I wish to interpret just how transcendent and unreal I felt in listening through this.

Most of the Draumar songs I've happened upon before ("Mondhymne", etc) had a lighter attitude with a bit more of a bleak, piano aesthetic to them, so I was a little surprised by how concise and well-rounded these four were. Regardless, this has prompted me to track down the older full-lengths to find what I've been missing. On a production level, Gebirge is immaculate: you'll be able to tell that this is not necessarily a real orchestra performing the sounds, but that's not going to be a hindrance for its intended audience. The drums can admittedly be a little bare and empty during some of the transitions where the ambient symphonic eloquence takes hold, but they definitely construct a more harried, powerful foundation during the black metallic infusions. If this had been twice (or thrice) as long, and the other content as consistent and stirring as this quartet of tunes, I might have numbered it among my favorite albums of the year; but even as it stands, Gebirge provides a splendid tour of an imagination that stands up to myriad, repeated listens, and it should prove exciting to hear what Draumar will compose next.