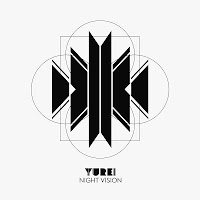 If there was something immediately striking to me about Night Vision, it was the record's free-flowing, jazzy rhythmic atmosphere, compounded by the fact that this is the work of Norwegian musician Bjeima. A few of you might recognize him from his bass playing on the latest Virus disc The Agent That Shapes the Desert, an album I fawned over last year and continue to fawn over now, and in truth Yurei possesses much in common with their output (and the earlier Ved Buens Ende works). The difference here is that in place of Virus' post-metal sonics you've got more of a roots, jamming progressive rock aesthetic being poured through a fusion strainer, but the similarity in vocal tone/delivery and the grooves of the bass are close enough that fans of the one might find the other to their tastes.

From what I've read, the Yurei debut had more of a metallic inflection to the guitars, but here they're usually cast in a mold of clarity that is matched by the pungent, frolicking bass lines. Lots of awkward, jazzy and jarring runs are constantly engaging the listener while the drugged, accented spoken word vocals ring out like it's open mic at some cautionary coffee house seated at the edge of a blizzard or other disaster. The beats are very fresh with a lot of varied percussion often taking the helm over standard beats, and Bjeima is also not afraid to incorporate a lot of synthesized effects in the tunes (like "Insomniac Bug Hunt") that give the album an added sheen of atmospheric haze, preventing it becoming too rooted in the shelter of an average  jazz-rock jam. A lot of the lead-work is implemented directly into the rhythm patterns, so there's a sense of complexity to the compositional style even if it's nothing incendiary or difficult on the ears, and a constant subtext of unnerving playfulness which feels like a bad experience with a cup of java, or a bad day at the office...

Despite its obvious nuance and open-mindedness, Night Vision is surprisingly consistent in terms of the instrumentation and the effect many of the tracks leave upon the audience. Occasionally a piece like the piano-driven "Sleepwalkers In Love" tackles a more classy, old-times 'noir' feel that feels like you've just walked into a speakeasy of the dead; while "Cranial Echoes" is altogether a creepier, atmospheric mood set against spectral, alien wails. For the most part, though, there's a jangling, energetic impulse to the writing which is steady through the 43 minutes of material. It's not entirely experimental, by which I mean it sets up its own parameters and then sticks to them. Night Vision makes a lot of sense, especially to those familiar with its influences, but it's still a fresh sense, and as there's a nigh on guaranteed appeal here for fans of the more avant-garde Norwegian acts borne of the metal scene: Ulver, Arcturus, Virus, Shining, Solefald or the Ihsahn solo efforts; not to mention followers of edgier progressive fusion/rock. Damn solid.