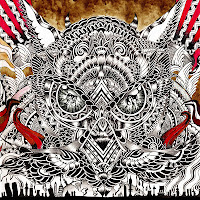 Kuolemanlaakso is yet another Finnish group which seeks a stripped down approach to songwriting, but not a new one, its members hailing from the ranks of groups like Chaosweaver, Barren Earth and such. The prevalent theme here is doom metal, but very well produced doom with a bold, brazen crunch to the guitars and a mixture of blackened rasp vocals, death grunts or mournful, ominous cleans, all in the native tongue. The first comparison which came to mind was Ajattara, though the focus here isn't so much on mug-swinging, blacker sounding grooves, and there are more atmospherics present to complement the simple, loping strides of the low, muted guitar passages. It's also similar to Tom G. Warrior's post-Celtic Frost outfit Triptykon, which Laakso has cited as the primary influence to this, even going so far as to hire on guitarist/vocalist V. Santura to produce this 8 track, 48+ minute debut.

Now, as one of a handful of folks who found Eparistera Daimones to be one of the most overblown records of 2010 (rather bland songwriting wreathed in massive production), this would not be a personal selling point, but Uuljas uusi maailma is far from a direct copy of that album. Where the two intersect is simply in that they possess a foundation of primitive, enormous guitars, and they both envision a hybrid of extreme metal genres moving at a slower pace, rather than attempting to ape doom/death classics circa Britain in the early 90s. I rather prefer the use of ambient elements that the Finns bring out here. Environmental samples, ominous synths swept off against the backdrop, tribal percussion and vocals ("Roihusydän"), swells of raunchy, oozing bass (as in "Kuun Lapset"), and a good balance of melody and low-end pummeling really round out this experience, and the songs are never so painfully protracted as to force a watch check on my end. The guitars are robust, rich, if not elegant, and the vocals are enormously well produced, probably even more entertaining for those schooled in the language. The drums are balanced, ogrish and really keep the momentum of the songs interesting even when the riffs grow dull.

In fact, I haven't a single complaint about the actual production of this disc: it sounds fantastic, up to any standards. Where it loses a little steam with me is in the guitar writing. There are some decent, weighted grooves coursing through a number of the tracks, but most of them just feel like stolid exercises in accenting the rhythm of the drums and measure of the songs rather than evoking inspiration in of themselves. Without their considerable atmospheric embellishments, they would feel rather dry in terms of content, and with the exception of a few of the acoustic passages or more 'exotic' progressions of chords, I found myself too often distracted to the vocals, bass or various other fragments of their sound. To be fair, even in the longer tunes like "Etsin" or closer "Aurinko", there is enough variation occurring that Uuljas uusi maailma never becomes a chore to experience, but catchier, superior rhythm guitars would have really hammered this album harder into my memory. As it stands, it's worth checking out if you're fond of the Triptykon full-length, the members' other acts like Barren Earth, or maybe even the better-produced Barathrum outings (where the bass is emphasized in a similar fashion), but it never felt entirely dark or ominous as was the intention.