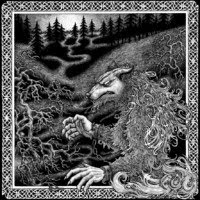 It's been five years since the Satanic Tyrant Werwolf last tore our faces off with a Satanic Warmaster full-length, that being the Carelian Satanist Madness: harsh, scrappy, and ultimately quite memorable. However, the man has kept himself occupied with another project, the heavy metal Armour, and a slew of EPs, splits and compilations from this project have likewise surfaced in the interim, including raw mixes of this very effort that were part of the mouthful acronym W.A.T.W.T.C.O.T.B.W.O.A.A. compilation released earlier this year. So now that the inimical Nazgul is back home in his primary creative outlet, were the results worth waiting for?

Your mileage will vary based on just how willing you are to take another pestilent voyage through the past, as Satanic Warmaster continues to churn out nothing but the purist brand of dense, hostile black metal, low on production values but high on despotic mayhem. Of course, Mayhem is a true point of reference here, with some Darkthrone and Hellhammer for good measure, and Nazgul seems the perfect one man tribute to these fundamental bands, performing all instruments himself. The lyrics still fancy the classical folklore and occult horror, with songs here like "Satan's Werewolf", "Bestial Darkness" and "Vampires", and the man's vocals are still as sadistic as all fuck.

The most striking characteristic of Nachzerer is the very compact, dark production. The rhythm guitars and bass seem to hover over the listener like a damp canopy of lycanthrope hides while the drums storm just below the surface, breaking through during fills and rides upon the crash. The momentum of a "Warmaster Returns" or "Satan's Werewolf" is difficult to deny, but I feel that the material truly sinks its teeth into my neck when he slows down to the morbid fare that is "Rotting Raven's Blood" or the flowing, submerged melodic power of "One Shining Star." The outro "Utug-Hul" is also quite nice, a ritual/medieval ambient piece with Nazgul's narrative blasphemy. In fact, this closing piece is potent enough that I'd love to hear him do an entire album in this mold, if he can ever find the time. Another track worth mentioning is the despotic "Bestial Darkness", which opens with crushing chords and organs before speeding off into dire vitriol.

Those who will appreciate Nachzehrer probably already know who they are: the legions of grim clad purists who don't give a flying fuck for innovation in black metal, and Satanic Warmaster once again delivers on that front. The riffs here are not perfect, but the overall hostility of the album's atmosphere travels miles on all four bloodied paws to compensate, and the lyrics are fairly engaging despite the redundant subject matter. Don't be fooled, there is enough dynamic balance on this record to provide a number of listens. The Satanic Tyrant is no fool, and he's no one-trick pony. He's written a decent fourth effort here, and while it by no means dethrones a Carelian Satanist Madness or Opferblut, it will still hunt you through the cursed midnight woods and nip at your ankles through the chills and fog.