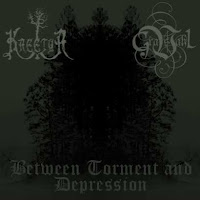 A split demo between Canadian Kreetur and German Gravsahl seems like a natural collaboration, as both bands skirt the edge of the truer black metal population to incorporate elements of electronica and ambient to their sounds, and both had previously issued only a demo. So, rather than ramble down the road of endless demos, why not attempt something unique for the next emission? Furthermore, the bands have this offered for free at their sites, so there is little excuse not to hunt this down if you've even a cursory interest in bands that seek to fuse the snarling, grim aesthetics of minimalist black metal with a bright, contemporary polish. It's, as usual, a wise choice on the part of both artists, and judging by the quality of the material here, which exceeds their previous work.

Each offers four new compositions, the first of which are claimed by Kreetur. "Rain of Torment" is an eerie, dirty synth strike to the accompaniment of rain samples and sparse percussion, almost a perfect little sequence for some obscure foreign horror film and it quickly builds an anticipation of moody, bleak psychedelia. "II Voyage Encore..." forms patterns of deep, morose synthesizer and programmed industrial drums, an eerie concoction topped by a glaze of simple chords and harsh vocals. "Tortured Mind" once again fashions a mystique for itself, over some buzzing drones and trippy synths that escalate beneath the vocal decay, and "Deliverance" swells with pure 80s brilliance, like some forgotten late night street fight sequence in a bad movie interrupted by Havohej or Abruptum. In all, I was quite pleasantly surprised by the moods this Canadian is capable of conjuring, it's something that you don't hear every day. The metal elements are downplayed and justly so, for they don't offer much in the way of interesting riffs, but they seem to work within the context.

On the other hand, Gravsahl's guitar riffing is huge and centric to the climax of decrepit vocals and spacey, atmospheric keyboards. There's a perfect, depressive backwash to the minimal production of this half of the split, a somber elegy which permeates the drained human emotions of the composition, and somehow escapes to festoon glory upon the sagging stars of this German's universe. "Of Apathy (Drones)" is lovely, while "Of Sociopathy (My Fault)" is a mind fucking trip of pulsing electronics that disappear into the terse beat and melodic guitars. This guy's vocals are just fucking sick, like a corpse-painted Martian lamenting the loss of his kind and the atmosphere of his world. "Of Depression (Cleansing Rain)" is like taking the Tangerine Dream score to some cult 80s film and dowsing it in black tongues of numbing ichor, while the closing "Departures" is simply a trailing, distant tone poem to the fade of passion, played on a single piano.

We often turn up our noses at 'bedroom' black metal acts, but I feel the tag certainly applies here, doubly so, because the productions are very lo-fi and possible for almost anyone with basic recording software, a synthesizer, guitar and microphone. However, this in no way should ever be depicted as a negative, because its really what the artist does with whatever he's given that counts, and Kreetur & Gravsahl both evoke and corrupt the light of hope through mocking, null sensations that feel as retro as they do a modern exhibition. 36 minutes of good music, for free, showcasing some promising if somewhat unrefined artists from two continents. I believe that if you've any inkling towards ambient black metal, and an open mind, you might wish to enter this domain.