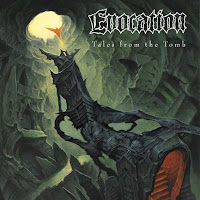 Somewhere along the line, after the members matured and found they still shared the passion for Swedish death metal that they once excelled in for their 90s demos, Evocation got its shit together and decided that the time was right for another foray into not-fame and not-fortune that was the extreme music business. Perhaps the wave of nostalgia for the form that had been rearing itself in the 21st century had something to do with the decision, perhaps the band just took a listen to their early goddamn demos and recognized all the years they had thrown away, but it makes no difference. Their Evocation compilation had been released a few years before, and a 3-song demo of new material, and it was well beyond the hour to release the first, proper Evocation full-length: Tales from the Tomb.

Though it was 15 years since the band had dropped the original pair of demos in 1992, there is just not much that has changed here. It's still pure old school Swedish death from the pens of Dismember, Entombed, Grave, and Unleashed, with the thick and punishing guitar tone infused with big grooves, leaden dirt-nap melodies and the bruised, bloody throat of Thomas Josefsson, who sounds a little more caustic and snarling than a Lars-Goran Petrov. The album includes all three tracks from the 2006 demo, and a wealth more, including a rather obvious cover song. The cover and logo are excellent, which is not a surprise since the band tapped luminaries Kristian Wahlin and Dan Seagrave to create something just as memorable as many classic albums of the 90s. Whether Tales from the Tomb itself should be counted as a 'classic' of retrospective death metal is unclear. They weren't the first, but as they were formed in 1991 and already issuing good music a year after, do they really count as 'retro'? Perhaps only in the perspective of releasing actual albums so far beyond the fact.

But surely this is a damned good time if you've any love for the style at all. The swift decay of the "Eternal Lie" intro is breached by the forceful walls of melodic weaving that inaugurate "The Dead", a faster piece with a strong, haunting element to the bridge guitars and bass. "Chronic Hell" opens with an immediately catchy storm of melody at a mid pace, before the playful morbid saturation of the verse, and a similar accessibility can be found in the flesh carving "Breed", the creepy old school crushing ritual of "Blessed Upon the Altar", the dance party Entombed groove of "Phase of Fear" and the fairly catchy, uplifting melodic death metal insurgency of "From Menace to Mayhem". The band do re-create one of their early demo tracks, "Veils Were Blown", streamlining it with the remainder of the album, so you can clearly see how little they've changed outside of the production. "But Life Goes On" might seem like a redundant choice for a cover tune, since some would argue that Evocation is merely an Entombed cover band of sorts, but they handle it well and the raspier vocals seem like at least a small alteration.

It pains me to reiterate the point through so many critiques, but how you feel about Tales from the Tomb really depends on your level of hostility towards derivations on a theme. If you pine at the aural maw for further interpretations of records like Left Hand Path, Clandestine, You'll Never See... or Like an Everflowing Stream, and cannot get enough of this, then Evocation has your punchcard to paradise, and are quite good songwriters themselves to boot. There are no disillusions about the intention here, this is an attempt to rekindle the morbid atmospheres once produced in the genre from that particular geographic locality, and a successful one. It may not tear one's face off as wonderfully as (ex-Centinex) Demonical's debut Servants of the Unlight from the same year, but its a great back-up and quite consistent and entertaining throughout.