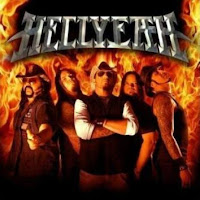 Despite what most bigoted anti-rural Americans would tell you, we could always use a few more heavy Southern rock bands, especially if they're willing to take the rustic, bumpkin grooves of a Molly Hatchet or Lynyrd Skynyrd, and the more recent, unsung Agony Column and Raging Slab and run with this cross-section of styles into a more extreme territory. Having drummer Vinnie Paul of Pantera adopt such a formula for his post-Damageplan project is not such a stretch; this man has grown up among such influences and both of his alma maters were certainly exhibited traits of nasty Texas grooves and shotgun rodeo attitude.

But the problem with Hellyeah starts long before the baneful first notes of the namesake track even erupt, and you need look no further than the absolutely shoddy cover image, which has 'poseurs' written all over it, a bunch of men in cowboy hats prominently displaying tattoos, crossed 'tough guy' arms or Vinnie's 'Here's lookin' at you, slickster rock pose', with the longhairs tucked conveniently behind for some metallic cred. With the undeniable notoriety and success Pantera, and the shitty bands Damageplan and Mudvayne (whose members represent 80% of this lineup, joined by guitarist Tom Maxwell of Nothingface), wouldn't you think a little more could be scrounged up than a flaming pose shot affixed to a horrendous Photoshop logo? This album was issued through Epic/Sony records, so are you fucking kidding? A little effort goes a long way, and the image fronting this debut shows none. It does not bode well for the musical content...

...and once you've peeled away every urge to simply toss this in the dustbin then and there, summoning up the old wives' morality play on never judging a book by its cover, you are greeted with a moderately bouncy thrash riff and Chad Gray's Southern charged hybrid of Rob Zombie, Phil Anselmo and David of Disturbed. I won't deny the man has some power in his pipes, but he's so often used it for the wrong reasons, and this is just the latest, an awful smattering of nu-metal aggression that wouldn't be sufficient for the backstage at an OzzFest. The remainder of the band also phones in the material, creating generic verse-chorus songs out of horrendously juvenile lyrics that wouldn't fly if the band members were 12. I mean, even in this very first song, the thrash rhythm disappears within a moment, ceded to an atrocious bounce-core groove chorus which was only mildly entertaining when Biohazard did it numerous times in the early 90s. As for the lyrics...

Seriously, is there a human being in this country, or this world dumb enough to actually think that these are good or inspiring lyrics? FUCK OFF.

Beyond this abortion, the band immediately lurches into a big melodic radio rocker you'd expect out of Puddle of Mudd or any other failure to launch at Alice in Chain's rectum. More melodic chords, a typical ascending pattern of notes and no lights on at home. Fuck, if I wanted to listen to this shit I'd just stick to Corrosion of Conformity's midlife crisis. The rest of the album merely bounces between these poles. The aggressive content includes the rappy stupidity of "Matter of Time", the more thrash-heavy "Waging War", and "Rotten to the Core". Wannabe Alice in Chains songs include "Star" and "Nausea", the latter being the one track on this album that is even mildly catchy, and even then only for a few seconds. I'd love to point out some other strengths here, but aside from the production, to which plenty of resources were poured into, there is just nothing one can say, for any of this pedestrian mental disability manifesto.

So in short, you're not getting a kickass Southern groove metal record here. You might have thought you were signing up for such a prospect, what with the cowboy hats, the Christawful band moniker and raucous attitudes. What Hellyeah is, is just a celebrity sausagefest of failure. Failure to write good music, failure as proof of a band concept, failure to even lick the boots of the band's other project (most of which are utter poo poo themselves). How about you tough guys harden the fuck up and write something worthwhile? Take all of this largely undeserved celebrity you have ridden into this major label deal, and write us an album that makes us want to drink rattlesnake venom, plant boots in city liberal hipster asses and shatter whiskey bottles at 100 yards with rifles? "Alcohaulin' Ass"? Clearly you need to lay off the sauce and haul some ass in other areas, like writing music that might validate the waste of space you are.