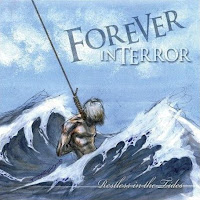 I'm not sure what that poor guy on the cover to this Ohio metalcore band's debut did to them, but it must have been awful, because these kids not only hung him naked but also dipped him in a restless sea for any pirate, shark or angry squid to pick off. But heir bitter revenge doesn't stop there, because they fully intend to expand the grisly punishment to the listener of this album, Restless in the Tides, one of the most stupendously generic attempts to cash in on the rising metalcore/melodic death metal crossover scene that was probably just a few years too late to make a major impact. One could possibly feel some sympathy for the young band themselves, because they were obviously hungry and at the time this was the vehicle of choice if you wanted to make the maximum impression on the MySpace dimension in the least amount of effort, but shame on Metal Blade, a once excellent heavy metal music label, for signing up and helping distribute and perpetuate this bullshit.

As far as their individual talents are concerned, the members of Forever in Terror are honestly not wretched at performing their instruments with some tact and energy. The roots of their sound lie in the Swedish reign of melodic death metal which was pioneered by At the Gates, In Flames and Dark Tranquillity and then raped to and through the womb by a whole cast of irritatingly shitty American bands like the Black Dahlia Murder and the whole Western Massachusetts radio metalcore squadron. There are quite a few little, uplifting melodies colliding throughout the tracks, though none of them manage to stick to the thoughts beyond the actual experience, and technically the band has it all fairly tight, though I cannot vouch for any translation into the live setting. The mix of the album is average for the style, supportive of its excess breakdowns and drum work but allowing for the melodies to ring true and clear.

The real problem of course that every little random act of death metal, thrashing or true melodic death metal found on this record is just a means to the next breakdown, and the vocals are the epitome of awful, pedestrial US metalcore screaming and growling which becomes tired after only a song or two pass. There is this relentless commitment to the endless, chug and groove mosh riff, many of which are typical brick rhythms heard around the world many times now, for at least a decade, when bands like Earth Crisis and Hatebreed 'perfected it'. Mind you, Forever in Terror does not have a hardcore influence like those bands, they are simply interested in the use of the metallic breakdowns to get the crowd roused and impress all the other bands and fans of this style. The band doesn't solely chug during many of these uninspired segments, though, they very often incorporate evil sounding leads and scales in the vein of a Slayer or Death. Unfortunately, these are formulaic and rather dull.

A great deal of the material on Restless in the Tides is completely forgettable tripe, but there are a few moments spotted about the mallcore rambling that actually do shine. Tracks like "The Chosen One" resort to fucktarded Killswitch Engage styled, soulful clean vocal chorus breaks to show the band's emotional side and pop sensibility (attention record label execs!), but then there are moments like the extended lead break "In the Face of the Faceless" where the band actually begin to resemble a metal band. In fact, the band's quality index rises and peaks the further away from the terrible breakdowns they journey, and if it weren't for such abysmally trendy sequences glaring at me every 20-30 seconds in these songs, I might have been able to develop a greater appreciation. Most of their songs teeter around in the 4-5 minute range, and generally feature about 30-60 seconds of half-decent music, but occasionally they'll go for an 'epic' approach as in "Shameless Crucifixion" or the title track. By epic, I mean the same shit as the other songs, only with an acoustic, In Flames-like outro ("Shameless Crucifixion") or proggy breakdowns with more of the hideously annoying clean, emo vocals with some clean guitars and even violins, which might take you by surprise if you actually cared by the time "Restless in the Tides" actually shows up.

This is far from the most talentless band of hacks out there, and when they show their willingness to branch out beyond the malevolent grasp of all things mall, they actually do begin to sparkle like a newborn baby's urine as it involuntarily splashes its parents for the first time. If they'd only disembark from the obvious trends they are attempting to line their pockets with, who knows what manner of potential would develop? But everything from the shit cover art, shit logo, weak lyrics seemingly borrowed from some angry freshman goth girl's English notebook, forgettable breakdown centrifuge of the writing, atrociously mediocre rah rah vocals and overkill of In Flames styled melodies needs to first be replaced if they're to make their way through the foggy haze of recognition and survive the inevitable collapse of this 21st century castration of extreme music.