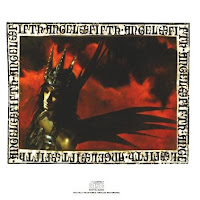 Fifth Angel stood as a fairly anomalous act for me to follow in the 80s, because they represent a much cleaner, tidier sound than I was quite accustomed to. No dirty thrashing, no pulverizing extremity, simply a band of quality songwriters who wrote two albums and called it a day (reforming recently). This s/t debut is accessible heavy/power metal of the highest order, for it seeks nothing else than to satisfy with its resonant vocal melodies, riffs played straight from the belt, searing guitar leads courtesy of the excellent James Byrd, and and overall favorable impression that I felt out of few other US bands in the 80s (perhaps Queensryche, Lizzy Borden, old Fates Warning, and a handful more). That Fifth Angel was not a bigger hit really saddens me. The band had a major label deal through CBS, and there was certainly some level of promotion for this release, since a lot of my friends in high school had heard or at least heard of it, and the consensus was favorable, even from those into more extreme bands like Slayer and such.

Fortunately, the band wrote such a fine collection of songs on this debut that they truly stand the test of time, and anyone seeking to rediscover the heart of 80s US metal would do well to study its vaunted arches of verse/chorus/verse/chorus/solo/verse/chorus bliss, because its one of the penultimate 80s 'pop metal' records, easily destroying the collected output of 99% of all the mainstream glam metal fops like Poison, Warrant and Bon Jovi, and well on par with the better work of the Scorpions, Quiet Riot, Ratt and so forth, though Fifth Angel had a more somber, serious undercurrent to their writing which would probably function better amongst the more serious power/prog metal fans of that era. Even the cover image to this record stands out to me, for its iconic image wrapped in fine, classic text font on a purity white background, and the production here is outstanding. Each instrument pops and simmers with clarity, and though the vocals of Ted Pilot might fly across the top like the profession of the man's own surname, its all distinctly captured, even the bass lines, which simple as they were, do their job readily.

As pristine as Fifth Angel is, it is still a metal album, and the band reassures you with the opener "In the Fallout", stomping along at a raging middle pace while Byrd snipes in with some great little melody licks. Soon, Pilot surges into a massive chorus that instantly imprints itself on the memory, and you can just hear how larger than life this band and record were. Its so easy to close your eyes and feel yourself fly above the city limits, where daring heroes dash against one another with bullets and fire amidst the clouds. "Shout It Out" slows to a pumping rhythm, once again adrift in Byrd's fancy fills and solid bass lines, and escalates to a huge chorus. This was such a fun song to play on the guitar when I was just picking it up, simple and powerful, with a serious tone to it and badass chorus comparable to the best of Twisted Sister, Scorpions or Quiet Riot. "Call Out the Warning" surfs back to a faster, cruising rhythm with a wicked melodic infusion. Somewhere in the backdrop, angelic choirs escalate as the chorus kicks into overdrive, and the leads are absolutely phenomenal and unforgettable.

Almost in lock step with the transition from "In the Fallout" to "Shout it Out" (there are way too many 'outs' on this record, one little complaint), we next arrive at the band's namesake "Fifth Angel", a moody piece with great 80s synths and a steady plod of careful triplets that waltz on into bridge chords, and then to one of the best chorus parts of this band's career: they call the Fifth Angel! That's all it takes, folks, and you're in metal heaven. Like "Shout it Out", this was a wonderful track to play along to, polished but still heavy in its own way. "Wings of Destiny" is a well composed power ballad, with a catchy chorus, but to be honest, it's the one reason I don't give this record a perfect score, because everything previous to the chorus and lead is not quite superior. However, I should point out that the band does not make this mistake again!

"The Night" is a resonant rocker with a huge atmosphere to the intro, and a bouncy, playful verse riff similar to Kingdom Come's "Do You Like It" (which came a few years later). Yet again, the bridge and chorus vocals work in beautiful cohesion, and Pilot's patterns are pure heavy metal perfection that would easily appeal to fans of Tony Martin or Dio-era Sabbath. "Only the Strong Survive" provides a loving slice of bluesy road warrior metal, chain gang guitar rhythms and a very Dio-like chorus. "Cry Out the Fools" (out and out again!) would easily be a great intro for any wrestler or gladiator to enter the sports arena, and it yet again commits a grievous impact on the palette with its pure melodic chorus syrup. However, waiting in the wings until the climax of the album is the gorgeous ballad "Fade to Flames", one of the very finest of all Fifth Angel's offerings, with beautiful acoustic work, and classical leads that flutter through them before the morose innocence of Pilot's emotional side comes to fruition. You can play this song at my funeral, people, because I'd love to see the look on the gather's face when the power metal riff erupts at 1:15, with the amazingly cute vocals and guitar hooks. I'd also like to point out that this track features some of the best leads I've heard in 32 years of metal fandom. Short, concise, and breathtaking, especially in the intense bridge sequence.

There are not many albums of this exemplary status in the mid 80s, for this was the time in which thrash was perfected and rapidly changing the landscape for most of the evolving metal fans. Traditional metal still thrived in the US and Europe, and Fifth Angel was certainly a band ready for the radio, but for some reason the connection was never made beyond the college metal station rotation. When you consider that bands like Bonfire or House of Lords (the latter also featuring drummer Ken Mary) made a small impact with videos and radio exposure, it absolutely boggles my mind that this Seattle act were not the biggest thing since the invention of the hair lint remover. Don't be turned off by their nearly glam looks, or pop friendly musical narrative, this was a great metal band and if you appreciate good songs and hooks then I'd highly recommend you track this debut down and dive in deeply. Its far better than the follow-up album, and if "Fade to Flames" cannot draw at least a tear from you for brighter, better times, well you're probably some remote appendage of SkyNet.