Inquisition - Into the Infernal Regions of the Ancient Cult (1998) 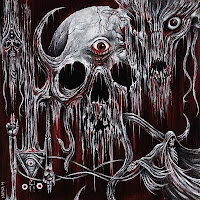 Considering the extremity of death and black metal, and their relative level of inaccessibility to the general public, one might assume that such bands were more fond of taking great risks with the delivery of their musical output. Yet, we find this happening too rarely. Most are simply content to process their magic in the footfalls of those to come before, perhaps edging them out in production or pace, but rarely in the magnitude of grotesquery their forebears summoned into existence upon the material realm with even less resources. We need to face facts, throwing on corpse paint and playing diabolic anthems to Satan is simply not enough in many cases. Such bands might still write a damn good album, punishing if derivative, but in the long run will they have the same impact as the originators?

Sometimes, though, an artist comes along that, through some method, manages a distinction upon the norm, and the (formerly) Colombian band Inquisition belongs to this rare species. Musically, they commit acts of ghastly, oppressive occult black/death metal, but where they stand out is in the use of garbled, amphibian vocal rituals in place of the expected black rasp used by so many others in the genre. Into the Infernal Regions of the Ancient Cult was the band's 1998 debut, recently reissued through Hell's Headbangers with some fresh artwork, and it still stands today as the band's most impressive output, with ripping old school black riffs and the echoing, signature vocals that will haunt you long despite any initial imperative to laugh out loud at them. Inquisition have over an hour here of meticulously grim, wicked evocations that are very likely the best of their kind to ever escape the band's home terrain.

Beyond the obvious use of the strange vocals, the band is also notable for their dynamic versatility. Obvious influences are culled from European acts like Bathory, Mercyful Fate, Celtic Frost, Borknagar and Emperor, and maybe a little US cult metal like Acheron, but the way the Colombians write their material is an open process that achieves maximum impact upon the listener due to the relative ease of digestion. For example, "The Initiation" uses a simple, glimmering folk/black metal pattern of the riffing that recalls Borknagar, but its placed here in an entirely different, morbid occult context that one would never predict. "Summoned by Ancient Wizards Under a Black Moon" also feels like some glorious ode calling at you from North European wastelands of history, and yet its instead crushing you from the South American jungles and the imagination of the sick fuck Dagon, a trip of turbulent, memorable riffing.

"Into the Infernal Regions of the Ancient Cult" itself is more of a Bathory meets Gorgoroth or Mayhem piece, with rolling drums and listless, steady rhythmic patterns that also makes good use of movie samples. "Solitary Death in Nocturnal Woodlands" is abrasive but beautiful, with a more sparse, raw appeal to the guitar work than other tracks here, as they lurch through the 9+ minute somber nightscape of the titular environment. "Hail the Cult" also features some ringing, ritual guitars over the echoing vocals, and "Journey to Infernukeorreka" has some glorious vocal swells and charging, punk/black rhythms that rock the facial skin off to reveal the leering devil below. But "Those of the Night" might be the most charismatic piece here, with a fun pattern of alternating guitar rhythms that bounce perfectly below the decrepit vocals before a melodic, majestic sequence that will take you by surprise.

For Inquisition, the risk to branch out and try something different has truly paid off, as most of their studio output offers a moderate to swollen level of quality unheard amongst most of their peers. The vocals are not the only focal point here, but the ability to deliver decent riffing that betrays the pure, typical necrostyle you'd expect from the band, and the incorporation of samples that seem more a trope in death metal than black. Into the Infernal Regions of the Ancient Cult may still be the band's finest hour, since it has this deliciously aged atmosphere that the others do not match up to completely. Sure, the delivery of the band's sinister lyricism might seem deceptively silly at first, but it could not fit the backdrop any better, a twisted replica of hellish dementia, corridors beyond the wall of human restraint and morality.