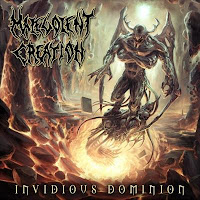 As far as the initial wave of Florida death metal is concerned, veteran Malevolent Creation has always been one of its less celebrated acts, a band with over 20 years of history, double digit studio output and a fair share of touring beneath their collective belts. They've had many of the same opportunities as peers Deicide, Cannibal Corpse, Morbid Angel and Obituary, but don't seem to share that same level of infamy or visibility. Most of those outfits have had very inconsistent careers, and Malevolent Creation is no exception to this, with several forgettable albums dominating the late 90s and early 21st century, but they've also wrought some decent efforts upon us that provided at the very least an impetus to bang heads until cramps developed.

For Invidious Dominion, their 11th full-length offering, the band is once again fronted by Brett Hoffman (he's been on and off with them since their inception), and this is a plus, because his vicious, almost thrash-like vocal tone is one of the few characteristics that have always allowed the band to stand apart from the crowd, like a more intense death metal alternative to the breakneck aggression of early Dark Angel. My preference for Malevolent Creation has always run back to the first two albums, The Ten Commandments and Retribution, and this latest record seems to follow straight in their footprints, focused on tightly wound intensity and an incessant barrage of death/thrash riffs that rarely afford the listener a chance to breathe. This is not an atmospheric album, its very straightforward in its punishing intentions, but despite itself, the rampant guitar onslaught somehow manifests this street-level brutality which bristles with spikes, knives, chains and bats that constantly apply themselves to the listener, like an attempt to set a Guinness world record for the longest death metal mugging in history.

Granted, 35 minutes is not all that long, and the tracks all fly past in around 3.5 minutes, but when you're on the receiving end, it seems like an eternity for a band to play music this hate charged and violent. At best, they dish out tracks with fairly memorable levels of carnage and superb song titles like "Target Rich Environment", "Lead Spitter" and "Compulsive Face Breaker", and the entire middle segment of the record starts to kick elevated levels of ass as it pummels through all of these in succession. Additionally, "Corruptor" and the closing title track seem to have much dismay to offer, with furious hyper thrashing rhythms, bleeding speed and a strict disregard for subtlety.

Of all these tracks, I cannot say that there are many individual riffs which stand out or beg for repeat plays immediately, but as far as joining the constituent parts together into a whole of punishment, glazed with well constructed leads and a crude but effective lyrical belligerence, Malevolent Creation prove yet again to be enjoyable artisans of this craft. It's essentially The Ten Commandments on a crack binge, cutting and battering everything in its path until it finds that final fix. It stabbed me quite a few times, but the wounds were sadly not deep or fatal this time around, and though its wonderful to hear this band plugging away with such fierce determination and frivolous intensity, this is not quite the masterpiece I hope to one day hear from such a seasoned firing squad.