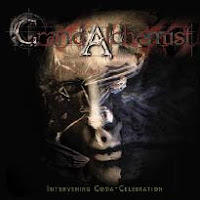 It wasn't an enormous amount of time before the raw, roots attitude of Norwegian black metal would part the ways to the inevitable process of evolution, especially when genre leaders like Emperor, Arcturus and Borknagar were leading the charge, ejecting the grating violation of their earlier years for a vast expansion into both the progressive and the bizarre. Around this core, a number of other acts would sprout up from seemingly nowhere, and while Grand Alchemist, who have thus far been fairly lacking in productivity, were not exactly competing at the level of mutation of an Ulver or Solefald, their one full-length offering is actually fairly impressive for what it's worth.

Intervening Coma-Celebration is indeed a symphonic black metal record, but it takes whatever liberties it deems fitting, and the result is a fairly gripping work of 47 minutes. You could very easily compare this to countrymen Dimmu Borgir or Emperor's late 90s (and beyond) work, but I feel like their actual riff writing skills differ greatly. The band has a propensity for clean piano tones that engage the near constant, glorious melodic output of the guitars, and when the dust stirs you are no longer standing in Kansas next to Immortal or Mayhem, but instead something expansive and dynamic without psyching you out like a La Masquerade Infernale, though I could see a similar audience devouring this post-haste.

The music is rarely striking at the level of instantly grafting itself to your persona, but its entirely pleasant to sift through the wealth of ideas and effort that went into this. The intro "Faced" balances heart-like, distant thumping with elegant acoustic guitars and beautiful ritual clean voice, before the mystical synths of "A Nailed Visual Effect" shine atop the plummeting chords like a gallery of artsy city angels being summoned back to their divine providence to wage war against a legion of abstract, shapely demons on the fringe of paradise. The use of clean vocals continues, like a slightly less potent I.C.S. Vortex against the sadly average rasped vocals that draw the center of attention. Electronics and circus like atmosphere abounds in "Down Again", somewhat reminiscent of Arcturus. The flight and frolic of symphony in "Incurable Longing" is superb, and this is one of the tremendous highlights of the record, with some desperate, forceful guitar work and a sense of constant chaos surging through its tonal, ringing bell and myriad layers of bewitchment.

Others that deserve mention here are "Approach (Open the Shell)", which is all over the spectrum of beautiful Gothic metal and an almost melodic death sense for raging rhythm; "Psyche & a Flower to the New Lifetime" is freaky but elegant, as much Beetlejuice as it is Edward Scissorhands; "Solemn and Sophisticated" is very rich in the development of its synthesizer lines over the driving double bass, though the guitars largely take the back seat; and "Snap Up the Raw of Existence" is a fitting, wonderful send-off for the record. In fact, there does not pass a single track on all of Intervening Coma-Celebration that will not in some way thrill and titillate the adventurous listener who approves of this broad palette of European, classical influence, born more of a Wagner or Mussorgsky than a Limbonic Art.

Despite all of the positive elements they bring to the fore, Grand Alchemist have produced an album here which is sadly more forgettable than it ought to be. The many flourishes of epic atmosphere created through the keys do not seem to end up in any direction, overbearing the listener that he or she won't have to concentrate on the rather average guitar rhythms (though the melodies are pretty well placed). The vocals are very typical for the genre, but the lyrics are actually pretty decent overall. Where an album like Prometheus or Enthrone Darkness Triumphant focuses on the metal first and sweeping atmospheres second, this one seems to operate on the opposite value. This does not render it any more or less interesting, but the 'metal' here is just average, cloaked in a robe of magnificent, manufactured starlight and delusional grandeur, enough for a timely escape into dark fantasy, but not enough to remove the 'For Sale' sign on its freshly hewn, internally cosmic lawn. It would be curious to see what the band could create next, but alas, 8 years now gone and not much of peep (though the band have written some new material and performed live in this time).