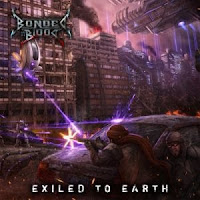 California's Bonded by Blood may have gotten off on the wrong foot with many listeners, as they not only took their name from one of the most famous of the Bay Area thrash metal bands, but also derived their style pretty much directly from that source. However, they weren't really 'bad' at this, it was just another example of a young band idolizing the 80s and attempting to manifest them once more in the present decade. Along with Gama Bomb, this band is essentially Earache Records fraction of the thrash revival initiative, and due to that relationship, they are likely to achieve more visibility than the average, patch collecting (in retrospect) gaggles of beer swilling cheese hounds just killing time until the next trend sweeps them up.

The catch is, having listened through Exiled to Earth about six times now, I can honestly say that the band truly deserves some attention, because here they've pulled together an intensely riffy, fun thrash metal record that applies the conventions of their forebears and focuses in on all manner of fun lyrics about diseases, dystopia, science fiction and the bleak future that might await us all in this world, or at least some parallel possible plane. The band still uses a vocal style that sounds like a Baloff/Zetro half-breed, but he takes it to a new level of inflection here, often pitching his voice higher like Vio-lence's Sean Killian, but within the context of the dirtier, torn throat manipulation. Actually, the music itself on this record sounds quite a lot like a mix of Exodus and Vio-Lence, with at least one song sounding exactly like it belongs to the latter.

To call the 42 minutes of this sophomore full-length 'explosive' would be an understatement, because these guys basically channel an energy surge and then ride it through the entire array of conceptual content. Tracks like "Episodes of Aggression", "Blood Spilled Offerings", and the spastic and brief "Parasitic Infection" arrive like a storm, riffs chopping and hacking like a mad half-doctor half-butcher loose in a maternity ward. This band knows how to conjure a nigh on endless sequence of riffs, that while individually do not have much merit, work so bloody well together that you just won't stop having fun listening to them. The breakdown in "Exiled to Earth" sounds almost exactly like "World in a World" from Vio-Lence's Oppressing the Masses, but otherwise that is also quite a good song, as are "Genetic Encryption" and the raging closer with a few nods to Testament (with more hyper riffing and non-Billy vox) "Cross-Insemination". Yes, these guys are really into exploring the idea of breeding, DNA tampering and population control.

Exiled to Earth is just one of those albums fully made aware of its limitations, thus forcing them directly down your throat at high speeds. This album is easily going to be the champion of many a live thrasher, it simply lends itself to that level of energy, but its complex enough for the guitar fan who wants to follow each riff out to its machine gun clip. The production is not overwrought, and ultimately Bonded By Blood puts their idols Exodus to shame, at least as far as that better known act's more recent work. This isn't quite perfect, and in a few years I may look at it as nothing more than a polished piece of derived Bay Area, just upping the ante a fraction for the more jaded, attention starved listener, but I certainly preferred it to a lot of the other bands playing in this style (Gama Bomb, Evile, Warbringer, Lich King and so forth). You'll feel like you have just been thrashed, and unlike so many other, shallower offerings out there, you'll want to dive in repeatedly.