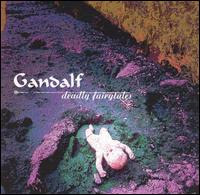 Come, now, people. Would Gandalf the Grey truly approve of this band's abandonment of a baby doll? Yet there it lies, alone and most likely abused, its owner dead in a ditch, or worse, having simply forgotten the poor toy on the cover of the Gandalf Wicked World debut. I remember first hearing this band and being fairly excited at the time that they'd scored this deal with Earache, for their brand of melodic death metal gone hard/Gothic rock was somewhat different for that label roster and the band seemed catchy enough to take off. They had produced a number of demos before getting the notice, gradually transforming from a stock Swedish death derivative to a band partially reminiscent of Sentenced, their copycats Cryhavoc and Taneli's later band The Black League, but spring loaded with oodles of lazy melodies that complement the basic chords and beats, and a fairly effective vocal delivery which will likely please fans of fellow Finns like Children of Bodom.

Deadly Fairytales sadly did not spark a lot of interest in the band, despite the Wicked World label's initiative to press a crop of new sounds on the late 90s CD buying populace, but its not a stretch to realize why, as the band do not exactly craft material that burns into the gray matter. The compositions are largely elegant, vicious but reined in with their steady rocking rhythms, and perhaps the band's unwillingness towards anything more extreme was counterproductive during the time Children of Bodom and a whole wave of melodic Finnish bands had arrived with frenetic albums loaded with shredding, keyboards and boundless energy. That said, they've got such great production standards and consistency here that fans into the Gothic metal crop from that part of the world (Charon, Sentenced, Entwine, etc) who don't necessarily mind the harsher black metal-tinged vocals would probably dig this.

This is one formulaic fucking band, and their songs consist of primarily mid paced, plump but predictable chord patterns constantly graced with the melodies of sadness and inspiration while Jari Hurskainen barks across the top. It's difficult not to bang your head along to "The Cradle" or "Marionette", but these are more of the diet soda variety than your loaded, sugary main course pop. The band does re-institute some of their more vicious death metal roots for tracks "Dark Memories" and some melodic death/thrashing in "Stronger Than Hell", and these are arguably some of the better tracks here, so perhaps this band would have benefited from a higher pace. Then again, when the band dials back the beat even more, as on the brooding, melancholic "Fade Away" or the cautionary ballad-gone-bludgeon "Eternal Fire", they also seem well absorbed into their natural element. Thus, Deadly Fairytales is a more dynamic effort than one might first suspect from the opening track combination, but not by much.

Shredding is kept to a minimum here. Instead, the guitarists focus on simpler leads that suit the song for the few seconds they co-exist, and disappear back into the chords. You're not going to be super impressed with Gandalf's musicianship, because that's not really what they were about. This is an attempt to tone the melodic death genre into a cruising rock mode, which more or less succeeds, though it is in no way strong enough to seek out unless you happen to find it on the cheap. The lyrics are fair, nothing ventured and nothing gained in that department, fairly generic inspiration tripe, but the vocals and riffs are strong enough that you could get absorbed to them if you crave this kind of vicious but flowing, melodic style. This is also the more 'metal' of their two records, if that makes any sense (I hope it would by now).