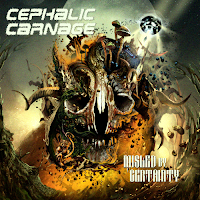 Here it is, the new album from the perpetually baked Colorado grinders and from the first spin I can tell that this is their best one yet - depending on if you liked the direction taken in 2007's tech death/grind Xenosapien. Spoiler: I did.

"The Incorrigible Flame" starts the album off a bit slow, while a good song it's not nearly as catchy as the rest of the album. It's not until the second track "Warbots A.M." that I feel that the album really starts. Combining blistering speed, catchy tech riffs, and a killer beat, this song gets the blood pumping and the head whipping. "Abraxas of Filth" follows and it showcases Nick Schendzielos' sexy bass playing (so far second only to Erlend Caspersen's performance on the Hideous Deformity debut) that is so often lost behind the drums and guitars. "Pure Horses" is presumably an excuse to use a horse sample (approved). "Cordyceps Humanis" meanders a bit at the beginning (for a doom song) but picks up after the sample discussing cordyceps fungus. Same with "Dimensional Modulation Transmography" which picks up at the one minute mark and never lets down. "Ohrwurm" is possibly the best song on the album, again displaying the great bass work and technical chops of the band while never straying into their older habits of mashing riffs together. "When I Arrive" on the other hand is my favourite track on the album, great song about Jesus coming back and a ending chorus that much like "Dying Will Be the Death of Me" is catchy despite itself. "A King and a Thief" is a great experimental crusher with a twisted solo. "Power and Force" unfortunately flys by at a blistering speed with no catchy hook to grab the senses until the very end - disappointing when stacked up against the rest of the album. Finally comes the closer "Repangaea" which busts out the sax again (someone has been listening to the new Ihsahn) and a slow broiling groove highly reminiscent of something off Mastodon's Crack the Skye.

Lenzig Leal's vocals are as insane as ever, never letting up and never becoming boring (Inherit Disease I'm looking at you); John Merryman's kick is on fire; Steve Golberg and Zac Joe bring not only the weed-influenced riffs but also the solos (notably the 'Michael Keene' solo in"The Incorrigible Flame"); and as I mentioned earlier, Nick Schendzielos brings the bass with a fury and luckily he has the production to back it up.

To sum it up, Misled by Certainty sees the band and producer Dave Otero (the same producer of Martriden's latest) take the classic Cephalic Carnage formula and create an extremely catchy, complex, and crushing tech death metal album while also making their most mature and accessible album to date. So grab your nearest drug-of-choice and enjoy the carnage.

I agree! Great album for this band.