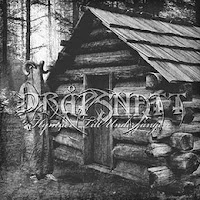 I listen to so much metal music that I often find myself just behind on the curve for certain artists, as with Sweden's Dråpsnatt. I had only recently gotten around to coverage on their first album, the highly promising debut I Denna Skog from last year, when I discovered that the band had already produced the follow-up. In the case of Hymner Till Undergången, we are treated to much of the same wealth of sound that characterized the debut: melodic black metal with aggressive, Burzum-like vocals mixed with cleans or deeper growls, and a love for the atmosphere conjured by creepy synthesizer lines, soaring pianos and gleaming, riverside folk acoustics, all gathered into a charge back to the rustic historic aesthetics being provoked through the wishful, Swedish lyrics.

It took a few listens before this sophomore grew upon my psyche, and that's because it lacked the punishing opener of the first album, which immediately grabbed you by the fur-lined cloak and thrust you into the band's vision. Here, the album is inaugurated instead with "En Ensam Sol Gar Ner", a bouncing, atmospheric piece to which pianos address the volley of chords, erupting into a common Swedish melodic black line over a blast beat. At first, seemed a little questionable or less passionate than the debut, but once you get to the beautiful bridge and the track surges back towards the blasted rhythm, you really start to develop a fondness for it, and all ends well. "Arvssynd" goes straight for the throat as if it were some outtake from Transilvanian Hunger, but then slows to a Burzum/Hellhammer fusion point with some fine if subtle guitar licks, followed by a swell of synthesizer. Once more, the band succeeds in providing a tasteful bridge with some clean vocal samples, and once more it segues back into a desperate, blasted charge above with the keyboards continue to thrill, like flutes of war.

This is pretty much the process for the entire course of the record. Tracks will seem rather mundane upon arrival, but then slowly reel you back to everything you enjoyed about the debut. The band's namesake "Drapsnatt" is breathtaking, with lush sequences of woodland beauty peaking out through the keyboard orchestration and flowing, simple bass. "Somna In" is all tranquility captured in the somber, clean guitars and pianos; "Ve Er" offers the same up front, but them a gradually escalating tapestry of sadness through the warmth-leeching rasps and the rural overtures. "Tonerna de Klinga" seems somewhat more schizoid, haunting and murderous through the use of deep clean vox alongside the band's grim facade. The finale to the abum, "Gasten" is one of the best songs I've heard from this band yet, with a female Swedish spoken sample alongside its folksy psychedelia and subtle, glittering synth tones.

As of yet, there are simply no fixes necessary for this band's original formula, but they will not impress you unless you are willing to listen at their pace and let yourself fall into the compositions. Granted, the band uses a lot of similar tempos and pattern shifting throughout much of the material, especially how they break out for the keyboard/acoustic passages, but as a full-bodied, 50 minute listening experience this is fairly welcome, like the bleak cover image of the wood cabin and its pagan proprietor against a forest background with the hints of golden ray shining through the boughs. Fairly mandatory if you enjoyed I Denna Skog. It's just as good. Breathtaking for anyone else who gives it a chance.