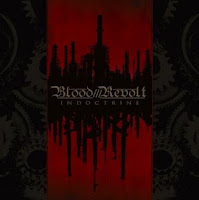 If any trio of individuals would be capable of carving a new path in a stagnant woodland of extreme metal tropes, it would have to be Axis of Advance/Revenge duo C. Ross and James Read, who partner here with A.A. Nemtheanga, the frontman of Ireland's most important black/folk metal act (Primordial). Blood Revolt is the name of this endeavor, and whilst it stitches itself together from a variety of genres, including death, grind, thrash and black metal, the use of the biting, wandering Nemtheanga vocals and almost Swedish ethic fuzz to the guitar tone create an atmosphere that quite simply has not been heard in any precise parallel. Add to this the cohesive lyrical narrative concept of a fanatic who, when pushed against the wall, will commit all, including his life to the recognition of his message, and the inevitable martyrdom, and you have an impressively realized debut.

Whether Nemtheanga wished for this to solely interpret the actions and lives of some of his own 'extremist' countrymen of the past, is really no matter, because the lyrics have a universal voice that one could apply nearly anywhere, to any political, religious or social catalyst armed and prepared to die for his/her cause. The lyrics are quite excellent, really, not that they use any complex imagery or narrative, but because of their blunt honesty and interpreting the mental state of a man about to kill for a cause, how he must prepare himself to transform his target to a faceless means to an end ("Salvation at the Barrel of a Gun"), or to become the trigger finger for some 'justified' cult ("God's Executioner, Praise Be") or simply exploding ("Year Zero") for his or her beliefs.

This is all delivered in blasted or grinding precision, with a thick and crunchy guitar tone and riffing style that often recalls Repulsion or the whole wave of retro Swedish death bands that take the fuzz to the umpteenth level. But though the metallic riffs form the core of the band's sound, it is Nemtheanga's range from his wavering, impassioned cleans to snarls and almost hardcore angst that truly brand it with the stamp of distinction. Another facet of the band is the use of keys or clean guitars for added atmosphere, as in "Bite the Hand, Purge the Flesh", which lurches through a number of dynamics and vocal stylistics, from blasting to a doomed stutter, or "My Name in Blood Across the Sky", which initially builds from a big wall of chords to a blitzing, howled frenzy and ultimately slows to an empty, graceful melodic doom. Other roiling masses of certainty include "The Martyrs Brigade" (great bridge segment) and "Dead City Stare".

Considering its rather unique framework, Indoctrine is actually not always firing at 100%. Though I love the great tones used, and the vocals which are simply not in the range of emotional possibility expressed by most other frontmen in the field, when it comes down to the individual riff component there is not a lot of thunder happening. They all crawl and charge efficiently below the vocals, and the band is wise to spice them up with slight, ringing clean guitars, leads or other environmental boosters, but the fact remains that without these other factors you'd have an average experience at best. Still, as a meeting of the minds between the poles of Primordial and Axis of Advance, Conqueror, Revenge and Kerasphorus, Blood Revolt are quite astute in proving to us that there are paths yet to be followed in our favorite medium. Just watch your step, because there are bound to be IEDs and landmines.