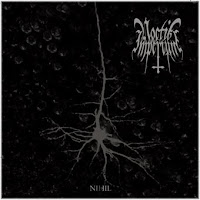 Despite the proliferation of underground acts that have sprung up in the past 20 years, Venezuela has yet to deliver a knockout blow in the metal world, and for that reason, Noctis Imperium is rather exciting, since they represent a strong possibility for success. Nihil is their third EP release in the past few years, and they've yet to commit to a full-length recording, but they've raised the ante and their visibility by wisely going back to the studio and re-recording some of their best material with international drum mercenary Nicholas Barker, who has performed with high profile black, thrash and death metal acts like Cradle of Filth, Old Man's Child, Dimmu Borgir, Anaal Nathrakh, Testament, Benediction, and more.

What the Venezuelans blaspheme across this 30 minute release is a series of taut, extreme black and death metal that uses pinpoint accuracy, evil streams of fibrous, melodic guitars, and a higher level of musicianship than the average act of this type: calculated through solid bass lines and sweet brushes of lead that can effortlessly cycle through arpeggios. Though the band is not a pure black metal outfit, at times they remind me of the more modern releases from Swedish giants Dark Funeral, who also practice this form of percussive, fast as a prize horse style which almost never falls out of a gallop or blitzkrieg. Beyond that, they've got a lot in common with Deicide and Morbid Angel, who must have been pretty big influences as the band were coming up. The vocals are a mix of your standard barked rasp and a more ritual take with multiple voices used in a more conversational tone, and are not a highlight of this recording, and the dearth of new material might be a turn off by some, but I'm sure the band would prefer to consider this the first 'real' effort since they've got Barker's enormous experience to back them up.

The EP contains an intro that the band have used before on both prior EPs, called "Ra-hoor-khuit", which is a simple swell of dark ambiance that hovers among the din of South American jungle mists. "Descensus ad Inferos", which had appeared on last year's Imperium EP, tears up the listener with its insane blast-work, atmospheric flourishes and striking if brief leads, as much occult death as black metal. "Bring Me Sacrifice" has also appeared on both the band's previous EP format releases, but stands out for good bass lines and uncompromising attitude, even if the actual guitar riffs swerve from blood-thirsty promise to forgetful familiarity ala Dark Funeral.

The band's namesake "Noctis Imperium" has also been recalculated for this, a pretty standard slab of forward propulsion which doesn't standout among its neighbors, and "Unus in Nihil", which takes a lot more room to breathe in, using slower rhythms and vaulted clean vocals to its benefit as one of the most immersion-heavy tracks here. Rounding out the short form release are a cover of Morbid Angel's "Maze of Torment", both loyal and worthwhile, as well as a live version of this same song, and "Through the Fire and Cosmos" from the band's Evil Philosophies EP. The live cuts probably feature another drummer, but he's not bad himself, accurately delivering the blasts and double bass that the songs bolster. They sound decent, though they're never really a highlight on any recording such as this.

Nihil is a strong selling point for the band to pick up attention from both fans of the incessant black/death tirade and the labels and distribution that Abyss Records offers excellent visibility towards. Clearly the concern was not to craft new material, but to polish up primarily preexisting songs, structure them with Barker's insanely accurate drumming, tack on some added value that proves the band sound just as tight on a stage, and see what gears would turn. I don't feel like Noctis Imperium are quite on the level yet as far as writing songs that call out to my attention. They are not exactly the best of riff writers, and the means through which the songs flow from one barrage to the next do not entirely impress, allowing the atmospheric segments to stand out more than they might otherwise. But there is no doubt that their precision and unforgiving speed will win them the heart of many black/death heartthrobs seeking the next big thing, and this EP should gauge their position, a step forward along the cobbled path of gruesome execution.