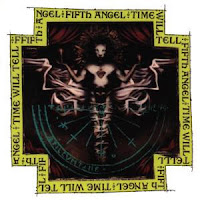 It would not have been possible to follow-up the self-titled Fifth Angel with anything superior, so instead the Seattle band went back to the studio to produce something in a similar vein, but possibly even more accessible than the debut. James Byrd was out, and the band added a few new members in Kendall Bechtel (guitars) and John Marco (bass). By 1989, of course, this radio friendly hard rock and heavy metal was on its way out, aside from the popular glam bands already in rotation on MTV's top countdowns (before the breaking of the alternative rock wave of the ensuing decade), so Time Will Tell really arrived when there was little chance of it being noticed among the crowd, and it did not fare very well, the band splitting up shortly after.

Often in this era a band would follow up a masterpiece with a stark disappointment, but for whatever its worth, Time Will Tell really isn't all that bad. It creates the same catchy atmosphere we heard on Fifth Angel, albeit less inclined towards superb leads or guitar fills that were clearly inspired by the former guitarist. The production is still top notch, the riffs very often stand to memory, and Ted Pilot's vocals are arguably sharpened up even from the previous work. Sadly, the album does suffer its share of less inspired writing than its beautiful sibling. Of the 11 tracks, 3-4 slack behind the remainder, and thus it could not be scored as favorably. But to any fan of House of Lords, Twisted Sister, Quiet Riot, Queensryche (80s), Lizzy Borden, or Scorpions its still probably a worthwhile listen to this day, an example of unintended obscurity for such polished and accessible writing.

The band starts off huge, putting a few of the best songs out front, with the rocking "Cathedral" at the helm, a steady rocker with nice melodic speed metal licks that ascend alongside Pilot's voice to one of the better, if predictable chorus sequences on the record. "Midnight Love" burns with passionate street metal vibes, popping melodies and solos that very nearly rival the work of Byrd on the debut. "Seven Hours" also survives upon its gleaming rays of guitar lead, though the rest of the song is not that catchy, nor is the ballad "Broken Dreams", though its successful enough to provide the atmosphere I loved about a "Fade to Flames" and not at all difficult to carve through. These are followed by the title track, which is actually a pretty good mid paced hard rocker that should thrill any fans of "The Night" or "Shout It Out" from the debut.

The inclusion of a cover of UFO's "Lights Out" works disturbingly well amidst Fifth Angel's original writing, so much that you'd never expect it if you were not already aware of the English band's original. "Wait for Me" is another track ala "Shout it Out" or "Fifth Angel", with very similar use of chord patterns, but despite a decent stab at the chorus its just not all that effective. I have no such problems with the elegant "Angel of Mercy" or the flowing molten metal that is "We Rule", with a pretty cool gang chorus supplemented with tasty little speed metal licks. "So Long" is another unfortunately forgettable mounting ballad, but the closer "Feel the Heat" is quite good if you forgive the ultimately cheesy title and chorus, at least how they function vocally here.

Time Will Tell is more of the same, and that's not a bad thing, but the individual songs do not seem to captivate the imagination and build up the heart's blood to a volcanic eruption like those of the debut. Cut out a few of its less inspired numbers and throw the remainder into a mix with Fifth Angel, and you've got yourself quite a blissful play list, but as a whole, this is not so readily recommended for consumption. However, if you enjoy radio friendly melodic US metal of the mid to late 80s, it is unlikely you would feel much chagrin at what these nearly 50 minutes indulge. Both Fifth Angel albums would probably be scoffed at by most of today's more extreme metal crowd, since they hinge on glam and the band certainly bore that image to an extent, but those brave souls among us who could care less and just like a decent metal song to bang our head to while we blast it in the car stereo will find something to digest on either of them.