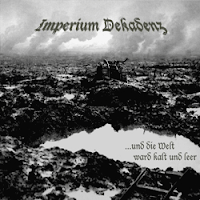 One of the brighter German bulbs to flare up in the new century thus far, Imperium Dekadenz are a black metal band who focus on that rarest of experiences: the experience. As such, each of their works can be said to accommodate and harvest a wealth of potential and dynamics that one does not often encounter when exploring their particular niche. Slow, drawn out, chord-driven compositions are graced with spacious, resonant majesty, and the band makes good use of acoustic piano and guitar interludes and segues within the thick of their glorious excursions to emptiness and regret. The cover fonts might delude one into an amateurish opinion of the band on their debut ...und Die Welt Ward Kalt Unde Leer ("And the World Became Cold and Empty"), which was released through local label Perverted Taste, but make no mistake about it, the Germans were already outgunning many in their class with the somber sensibilities that permeate their powerful expression.

The "Einklang" intro balances ambiance with grim, distorted, leering narrative before the arches of percussion and the bloodied longing of "Glanz der Klinge (The Blade's Resplendence)". This is not an intricate composition, merely a driving hymn of pain with a crude forward melody served with a condiment of cold, tortured vocals. "Halls of Lust" is a far more prolonged distraction, the most epic of the album at 8 and a half minutes, with a repetitive, almost Viking whore sense for sailing simplicity that very well rears a late 80s Bathory influence (Hammerheart and Blood Fire Death in particular). "Of All Ends" collapses into truly punishing territory due to its vacuous, repetitive climate, industrial warfare segue and ensuing increase of pace, while "Fields of Silence" batters a slowly dominant, unforgettable sequence of chords straight into your psyche, leeching out the warmth and sunshine from your emotions.

Other points of interest here are the interludes "For Those Who Sleep Eternally" and "Meine Reise Durch Die Zeit (My Journey Through Time)", lighter fare that gives the exhausted traveler a brief respite through the band's oppressive, depressing journeys. The title track outro is equally desperate, with swelling orchestral synthesizers surrounded by the themes of storm walls rising and rushing through the mountains and across the open air. "Schwarze Wilder (Black Forests)" is perhaps my favorite single metallic track on the record, with a frigid but regal tone to its wending melodies, a simple yet effective power to the chords of the verse. Another of the tracks longer pieces, "Gefrorene Wunden (Frozen Wounds)" is also stunning and consistent, locking in the debut at over 45 minutes of escape that you can sit through on some windy shore with your headphones, or perhaps the onset plague of winter or warfare.

Imperium Dekadenz do not deal in complexity, whether through the individual riffing or the layout of the songs. Most are content with just 2-3 major riffs, perhaps a surge in pacing that occasionally borders on and succumbs to blasted speed, but through all the repetition and attitude the band simply have the capacity to soar over you like a blanket of encroaching night. The vocal presence is magnificent and the production offers ample traction to the guitars without losing the percussion or bass. ...und Die Welt Ward Kalt Unde Leer would be shortly surpassed by the band's sophomore effort Dämmerung der Szenarien, still their crowning achievement to this point, but it stands as an impressive debut for those who like their black metal to express itself clearly, and coldly, with but a hint of beauty.