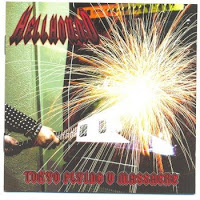 As they prepared for their first studio full-length effort, Japanese retro metal worship cult Hellhound had a few challenges to overcome. Could they climb above the rank and file of generic tribute band biting off riffs and tweaking them to the legal definition of unique, and could Crossfire tighten up his own act like a sphincter to increase the level of compulsion the listener would feel at listening to him for a complete album of 'original' music? If the ensuing debut Tokyo Flying V Massacre is any indicator, the band had improved quite a lot in just a few years. Though the end result is hardly that much more memorable, it delivers a number of decent tracks among some that should have been scrapped permanently.

I was somewhat confused by the first track, "Metal Attack", which is essentially a chunk of the song "Heavy Metal Generation" from the Welcome to Metal Zone EP in 2004. It sounds a lot like Metallica's versions of "Blitzkrieg" and "For Whom the Bell Tolls", and not very interesting, though the production of this version is better than its original form. The confusion is that "Heavy Metal Generation" itself is also included as the finale of the album, which seems strange and a waste of space, unless the band had plotted this as some sort of 'reprisal' effect. The lyrics to both tracks are different, granted, but this was a redundancy best avoided. The track "Metal Zone" is also included upon the Tokyo Flying V Massacre, and as that was not very good in its original incarnation, it was also unnecessary, especially when the new originals are so much better.

Speaking of which, the namesake "Hellhound" is pure, raging old fun inspired by the British and German greats at the dawn of the 80s. Crossfire has somehow married his voice a little better to the music. Its the same meaty shrieking as the previous EP, but a little lower in the mix, which merges in with the thick, simple chords and driving rhythm section. When the backing vocals cut into the chorus, it works very well against his grating air raid siren domination. "Samurai Warrior" is a powerful if predictable speed metal anthem celebrating the near mythic historical figures from the band's homeland, and "Rock Like Hell" is basically AC/DC taken to Accept levels, with ballsy backing vocals. "Metal Assassin 666" spins off into darker, power/thrash territory, crunchy mutes building up to some of Crossfire's more insane screaming that reminds of Peavy Wagner on the early Rage records. We all know where the name "Take You Like a Hurricane" came from, but the song is pretty standard, mid paced metal with big grooves and siren-like shrieks. Two more 'metal' title songs round out the bunch (for a total of 6/10 of the album): "Heavy Metal Patrol" and "Metal Warrior", the latter of which is some charming and fuzzy speed metal.

If you can ignore the 'trist' of previously used material on this album, the remainder is actually quite a good time. All of the instrumentation has come together in unison with the vocalist, and I love the chunky tones and backing vocals. The band's leads fulfill the potential of the debut EP, and a few of the songs like "Metal Warrior", "Samurai Warrior" and "Take You Like a Hurricane" and "Metal Assassin 666" will stand out beyond just a few listens. Tokyo Flying V Massacre also has one of the best possible titles an album of this sort could ever possess, and the title alone makes you want to get excited. Unfortunately, the album is not wholly consistent enough to be considered 'good', but its a nice set-up for the following Metal Fire From Hell, which expands upon even this sound to produce something worthwhile if you're digging for Japanese hilarity.