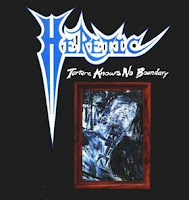 Heretic is another of those painfully overlooked 80s acts who managed to produce an unsung classic in their sole full-length Breaking Point, an album I still listen to today with regular frequency. That would be the work that ultimately sold the band's then front man Mike Howe to replace David Wayne in Metal Church, who would ironically go on to front Reverend with the rest of the Heretic cast. But years before Howe even joined them, the Californian band already existed with a previous vocalist, one Julian Mendez, who had a weaker and shrill, but acceptable range to mix with the unit's hybrid of power and thrash metal aesthetics, and their first release through Metal Blade was an EP known as Torture Knows No Boundary.

This is 18 minutes of hard hitting, traditional power metal with a hint of early Metallica. Think mid 80s Judas Priest meets Kill 'Em All, and you're not far off the mark. Mendez is not as effective as the later Howe's deep, biting tone, instead reminding me of a median of two other Metal Blade vocalists: Lizzy Borden and Frank Tyson of the more obscure Krank. It's dirty in the lower registers, and pretty shrill at the heights, though he can't match the pitch and delivery of Lizzy himself. All this would be acceptable if he had been served a series of high quality tunes as on Breaking Point, but while the style doesn't differ, the riffs and composition of this debut were not yet fully gestated.

That's not to say Heretic didn't have a few scorchers on their hands, and I rather enjoyed "Blood Will Tell" and "Portrait of Faith". The former is a road worthy rush with some uplifting chord patterns that are fun to plug along to; the latter is hands down the best track here, with the catchiest riffs and arguably the most urgent and powerful due to the simple but effective bridge with gang vocals. "Riding With the Angels" is hardly offensive, but it has more of a straight up NWOBHM feel with Mendez whining across the predictable chord sequences. "Whitechapel" is worthwhile, with perhaps the most memorable chorus of this early material, with one of Julian's best screams and at least two good riffs, but the closing instrumental title track doesn't add much value (they'll pull off a far better instrumental on the full length called "Pale Shelter".

So what you're left with are three pretty good tracks that foreshadow the greatness to come in but a few short years, and then two that just don't pass muster, for about 10-11 minutes of overall value. As a bonus to a reissue of Breaking Point, they'd function fairly well, but I'm not aware of such a compilation, so you're better off just to skip this and head straight for the full-length if you're new to the band. Torture Knows No Boundary is merely a footnote to a legacy that should be remembered for something far better, assuming that fresh fans beyond the core few in the know ever wake up and discover Heretic for themselves.