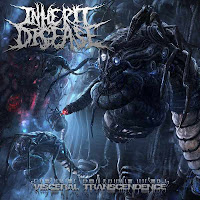 Something is seriously happening in California of late, because its quickly become the haven for a large number of technical, brutal death metal acts that are savvy to both the benefits of aesthetic packaging and songwriting that can string the listener along without loss of interest in what otherwise might be a dull, expended category. Inherit Disease are another band joining the ranks of Decrepit Birth, Severed Savior, The Faceless, Odious Mortem, Arkaik, and others as they chisel out a huge block of territory to explore, and if the gorgeous cover art to their sophomore Visceral Transcendence does not captivate your attention, then the band's mesh of methodical, percussive riffing occasionally infused with spry lead work and crazy bass lines are sure to draw you into their spell.

There are some who would immediately pigeonhole and dismiss Inherit Disease as another of those 'generic tech death' acts who automatically fail at cool as they do not produce a recording which sounds like Autopsy or Incantation circa 1992, just as there are some curmudgeons who resist the lure of the cell phone, the iPod, the escalator and the motor vehicle. Believe me, while this Californian act is not 100% unique and they don't deign to be, they write songs with such a bludgeoning force and under current of tightly wrought, pumping vitality that I found them not only engaging but actually pretty damn memorable. There is the occasional squeal of annoyance, and perhaps a riff here or there that doesn't enthrall, but in all its a well produced, tautly executed work of hostility. Their roots lie in the obvious influences of Suffocation, Cannibal Corpse, Deicide, Gorguts and the like, but I must commend them for their excellent drumming, qualified chugging momentum and for never at any moment devolving into flatulent, noodling tech jocks.

In fact, the first few seconds of the opener "Vessel of Inhumanity" are about as wanky as this band gets, with a flight of wild guitar over some fabulous, plucky bass strokes. Its almost as if the band wanted to tease you into thinking they were something they aren't, and then a brief few measures later dump concrete on you from the back of a mixing truck. From this point on, it's fucking hammer time, as dynamic chugging onslaughts consistently thread you through a vortex of carnal clobbering that changes its pace as often as a cold, calculating food processing plant batters, stretches and seasons its constituent ingredients into a final, digestible product, and I mean nothing negative by such a comparison, because this is one factory of bone grinding you would do well to lay down your currency upon.

Appreciable excursions into butchery include "Hivemind", with its writhing old school death blasts that cede to machine-like artillery grooves while the bass flips and flabbergasts amidst the unrelenting, pulverized certainty. "Digital Rapture" creates a spastic, discordant turmoil through which the brick house muted mayhem contorts into conquest, and "Prolific Dominance" is dense and distressful as the cautionary, guttural vocals hem and haw with the constant shifting mosh. Note that Inherit Disease are not quite a 'slam' band. The grooves are many and they are very well plotted, but not the garden variety crap spewed by so many deathcore or lesser USDM acts. I also appreciate that this is a band concerned with technology and human futurism rather than a typical, gore-soaked slasher film tribute, as "Nanoscourge" and "Beyond the Tyranny of Entropy" scurry through tales of cataclysm, both synthetic and naturally occurring.

If you're in the mood to have barbed wire fed in one ear and out the other, all your mushy gray matter and rhythmic resistance delivered on the far end in a sick jubilee of brains and chain link, then Inherit Disease provide you with just the right, hostile incentive. Individually, the elements at play here do not promise innovation, but taken as a sum, crushing statement this is an enjoyable album which trumps their debut and catapults them into the ranks of promising West Coast tyranny that might rule our roost for a long time coming. Resist at your own peril, but not at mine.