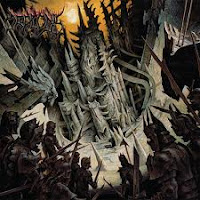 It's been 11 years since we last heard from California's obscure band Draconis, who had a brief productive spurt in the late 90s that resulted in the debut album Overlords of the Greying Dawn and The Highest of All Dark Powers EP, but judging by the sounds coming out of the speakers here, this time has been put to excellent use. The Cult of the Dragon is an anomaly, a US black/death metal record that sets a pretty high bar for itself, infusing melodic death and thrash metal rhythms wherever applicable to create a mesmerizing vortex of hostility, produced with deep, rich guitar tones and dynamic poles that are constantly engaging the listener's interest. Why the hell has this band been hiding out for so long?

Most importantly, Draconis is a band that understands the value of the riff, and this record is simply loaded with them. Not a track goes by without some ear catching volley of notes, and they've somehow managed to make these styles come fresh in the transition, which is no easy task. Granted, The Cult of the Dragon is not completely unique, and you're likely to draw faint comparisons to an entire host of Swedish melodic death or black/death acts. I caught a trace or two of the excellent and overlooked Mork Gryning, at least their later material, or perhaps the precision, chunky guitar work of Amon Amarth, though the vocals are delivered with a rasped aesthetic, which along with some of the shimmering, discordant chord-banks, is perhaps the most 'black metal' this album really gets.

A succession of extremely promising tracks aligns this album with the attention span, beginning with the warfare-torn intro of "Exalted Infernal Legions", ceding to a pummeling gallop of thrashing aggression and morose, descending streams of notes that conjure sadness and fallen glory. "The Cult of the Dragon/Authors of All Pain" opens with a hypnotic pattern of melodic notes, then one of the best melodic, choppy death metal sequences I've heard in a verse rhythm all year, before the competent bridge riffing and a mug-swilling bounce of a lead sequence that should sate your Scandinavian glory whoring. "Beckoninings from a Distant Void" features an evil riff right up front, then once again erupts into majestic, flowing guitars that alternate from blacker climes to villainous death. You're already in rapture when the clobbering intro riff to "Bloodlust" rolls right into some Hate Eternal-like octave chord slides, and the thankfully brief seconds of breakdown serve only to further the mangling, war machine momentum. Some of the thrash/death guitar tones in here even remind me of the heyday of the mighty Pestilence...

If you're thinking the band might set you up for disappointment by delivering a combo of their best material up front, think again, because the remainder of The Cult of the Dragon is just as coherent and well written. "Screams of Endless Torment" has some fun, frolicking bass and down pitched, corny narrative that do little to distract from the amazing, bouncy melodic death metal guitars, and "Curse of Salvation" is pretty much everything you enjoyed about a Dissection or Sacramentum with an intense, galloping thrash attitude. "Unveiling the Hidden Knowledge" is a fine instrumental, though the song would not have suffered from a vocal presence, and though "Within the Shadows of Eternal Misery" is probably my least favorite individual track on this record, its still got at least the one charging, mid paced swagger before the minute mark. "The Cult of the Dragon/Lords of the Dark Destiny" closes off the album much as it started, with a surge of catchy black/death, hammering percussion and more riffs than you can shake your sacrificial dagger at.

The Cult of the Dragon is indeed impressive, even if it does languor in the shadow of perfection. At least eight of the tracks will have you raging if you an appreciate the mix of styles, and as I've been lacking a proper fix of quality melodic death metal, it also sated that desire. Clearly this band took their time writing and mixing the record so it would deliver on all fronts, and almost all the 42 minutes of playtime deliver. Hopefully this will garner some real interest for the band, as their debut did very little to cause any stir and is largely forgotten. Armed with a fine Dan Seagrave cover image, decent lyrics and a host of quality songs, this is a three-piece worth your attention and time if you still place any value on the potential of melodic black/death done right.