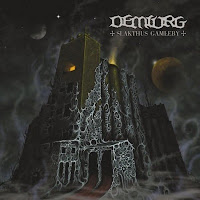 As someone unfamiliar with much Swedish language or Swedish history, and only the tether of musical fanaticism to bind me to that region of the world, the title to this record threw me for a loop. I translated that 'slakthus' meant slaughterhouse and Gamleby was a geographical region of the country, so perhaps this is connected to some historical murder that I am unaware of. At any rate, it's safe to say that this is a striking title for a death metal record, and anyone that has enjoyed this supergroups prior output The Hate Chamber and Breath of the Demiurg will be very pleased, since the members have gone all out to write some good songs that keep you involved without any surplus of self-indulgent brutality or pedestrian, misogynist gore tropes.

Of all Rogga Johansson's projects, this is likely the one with the most high profile collaborators. The incomparable Dan Swanö performs the keyboards and leads, Ed Warby of Gorefest, Hail of Bullets and many others (including The 11th Hour band with Rogga) is on the drums, Johan Berglund (Ribspreader, The Grotesquery) on bass, and some added, clean vocals are contributed by Pär Johansson of Satariel, The Few Against Many, and so forth. Rogga adds the brutal vocals and guitars, and the sound evoked is pretty reminiscent of the earlier work of another Swedish all-star team, Bloodbath (connected here through Swanö). As with any of these 'one degree of separation' acts, you can expect the collective experience of its members to shine through in the songwriting, and Slakthus Gamleby is no exception. Carefully crafted, evil death metal rhythms wind through atmospheric phrases, synthesizers are used to a great, bombastic effect, rounding out the deathly core, and the band even explores a little of the doom element of the Rogga/Warby project The 11th Hour on a track like "Travellers of the Vortex". The strength of the melodies here might also remind one of another project both Rogga and Swanö have been involved with, the mighty Edge of Sanity.

The band keep it simple, and they keep it fun through the steady chugging of "Life is a Coma", glazed in one of the most clear and punchy guitar tones I've heard from Sweden in years. Simple grooves abound and Rogga does his best to channel the thick vocals akin to Swanö or Mikael from Opeth. The girlish clean vocals did throw me for a loop, and were completely unnecessary here, but they do at least function over the music and it's not a major distraction. "Death Grasp Oblivion" is a better track with some melodic power/death that busts out into this truly grisly old school riff to die for. "Travellers of the Vortex" is slower, almost a death/doom piece, while The Cold Hand of Death feels comparable to some of Rogga's other bands ala Ribspreader or Carve, with the added element of the keyboards. Other highlights include the strangely uplifting melodic froth of "Cold Skin" and the grooving, measured mystique of "From Laughter to Retching".

Slakthus Gamleby is a more accessible effort than either of the previous records. There is simply no denying the studio polish here, nor the friendly composition, but it still maintains the evil intentions of the genre, they're simply 'fluffed up' by the atmospheric ingredients. Rogga's voice sounds fantastic, if derivative of the better known vocals of some of his Swedish contemporaries, and it's great to hear Dan playing the synths like he did on his solo record Moontower. The rhythm section is ample, and thankfully the clean vocals are not overused. I had a pretty great time listening to this, though I won't say the individual riffs are always that impressive, and the album is not incredibly memorable, but if you enjoy the first few releases of Bloodbath, or Edge of Sanity's The Spectral Sorrows or Purgatory Afterglow, then this is worth a listen and perhaps a purchase.