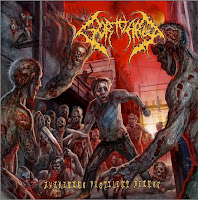 Another California death metal act to assist in the corrosion of that far off land's moral fabric, Gortuary actually operate at a different wavelength than many of their peers. Since their formation in 2006, they've been fine-tuning a percussive brand of aggression that balances extremely guttural vocals (like an Incantation or Mortician) with a shifting, zombified tenacity that spurs on the annihilation of the listener into a puddle of mulch. I cannot promise you that Awakening Pestilent Beings will captivate your attention like a lot of the Californian peers like Decrepit Birth, Odious Mortem, The Faceless or Severed Savior, as they're simply not as musically inclined towards memorable writing. However, they do come out firing on all cylinders and attempt to give you the ass bludgeoning that, really, any of us who listen to this form of music deserve.

I'll pick the track "Gluttonous Consumtpion of the Uninfected" as an example of the madness this band is up to. The track is so fucking heavy that it comes off almost as some sloppy mess of start/stop blast beats that collide into other, separate blasting beats while the riffs weave their way through a morass of grind and thrash rhythms, only to break for some well timed but not terribly valuable leads. Nate Twyman's vocals are like the voice of the abysmal maw itself warning you all of your inevitable devourment by the forces of madness beyond time, and a few of the riffs are good, but for example, the slamming brickhouse break near the close of the song is sadly just another mute/chug squeal riff that has honestly worn out its welcome by now.

The title track provides another piece of evidence, a twisted wreck with a ton of squeal amidst its hammering footwork and hostile grind. There are moments here that evoke Suffocation, Exhumed and perhaps even a few seconds of old Pestilence, but ultimately they don't add up to any truly standout riffs, and its not much beyond a stock exercise in lethality. Tracks like "Compulsive Occular Torture", "Necroticizing Infection" and "Diminishing of the Mind" do little beyond this. Occasionally you'll get a lead or riff break which zips you into a state of attention, but the rest is just the expected bloat of a band attempting to balance brutality and technical land mines without much concern for the actual song structures and value of the individual riff.

Still, though I can't say I enjoyed the experience enough to continuously return to it, the band deserves some credit for being as heavy as a dumptruck full of undead that have swallowed their weights worth in concrete sludge before their unloading on your testicles. The production is punchy, the few samples well timed and horrifying, and the energy clearly is not the issue here. I simply would not pick this record out of a line-up of more refined, transfixing works against which the thoughts of murder and mayhem correspond. I am reminded of a Severed Savior or Sepsism, only not nearly as good.