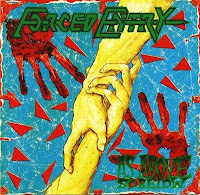 I think the moment I first laid eyes on the horrible color context of the Forced Entry sophomore album As Above, So Below, I was already smitten with disgust. Having found their debut Uncertain Future a punchy, bone crushing debut of dynamic mosh-favorable thrash metal loaded with catchy grooves, and one of the true hopefuls of Washington State alongside Sanctuary, I was actually eager to hear how the power trio would progress. Progress they did, if you look at the album as a strict work of musicianship, but sadly, the band have included a few stupid moves here which, perhaps in some attempt to bridge the gulf between artist and audience, seem more worthy of some campy street thrash band as opposed to the titanic wall of groove sound these gentlemen had patterned on the debut.

As Above, So Below does start off with one of its strong points in the effortless smackdown of "Bone Crackin' Fever", and they were wise to place this first, with its engaging momentum and harmonic spew, sometimes fast and then sometimes slow once the band breaks to the mid paced chorus thrash riff. The production is quite refined from Uncertain Future, and the instruments all just as percussive and polished, and this is one of the few tracks worthy of the predecessor, if you don't mind the goofy lyrics. "Thunderhead" proceeds with some steady inclines and declines of thick, chugged riffing, but the riff patterns sound pretty similar to the first song, and ultimately its just not put together as well, though hardly a pestilence upon the ears. Beyond this, the strange clinical riff that inaugurates "Macrocosm, Microcosm" into a funky, bass driven rhythm reminiscent of Prong heralds that this is not necessarily going to be the same Forced Entry we knew before. Of course, if you enjoy Prong, and can imagine a Beg to Differ era track with this more aggressive vocal style in the vein of Testament or Metallica, then have fucking at it, sirs.

"Never a Know But the No" is a soothing ballad that develops into some limited thrashing, much like a "Welcome Home (Sanitarium)", "The Ballad" or "Cemetery Gates", though not even a fraction as memorable, and despite the positive opening thrash below a dipping bluesy, wild lead, "We're Dicks" is fucking retarded. Was having a track called "We're Dicks" supposed to endear you to the 'beer drinking moron metal crowd'? The song is stupid, the lyrics even worse, and its the sort of drivel I'd expect only of a Billy Milano project. After this steaming disappointment, "Apathy" is a welcome relief, a barrage of stormy thrash which seems like a refined spin on the debut's formula for lurching grooves and oppressive atmosphere. The lyric patterns aren't great, but at least it's not 'We're a Bunch of Fucking Dicks'. "The Unextinguishable" is likewise pretty good, but "As of Yesterday", despite the see-saw like carving rhythms suffers from rather trite bluesy, emotional vocals and a weak structure. "When One Becomes Two" is yet another track that should have been placed somewhere near the front, since its got some great guitars and reminds me in total a little of the Boston band Wargasm, who put out a decent debut.

Lastly, because "We're Dicks" was not already as dialed in dumb as they come, we get the goofy, exciting "How We Spent Our Summer Vacation". Now, this track does benefit from a few half decent, grooving rhythms, but the digging thrash of the verse is destroyed by the absolutely fucking stupid lyrics, which might have appealed only to some over-testicular 13 year old trying to impress his skateboarding friends. I mean, read this shit:

I mean, this is not Tankard we're talking about, or Atrophy's loving but stupid beer roster in the now, not so legendary "Beer Bong", but an act of confusion and idiocy in the wake of the more serious lyrical elements found on this album. Had it been funny, well perhaps I might overlook its crudeness, but its not, and neither is the song all that great. Its as if by their sophomore album, Forced Entry had already given up on thrash metal, perhaps another telling sign of how the genre would crash and burn about within a year or two here in the States (the negative ripples then coasting off to Europe, South America, and so forth). 'Get fucked up! Get fucked up!' Thanks for preaching us the course of our adolescence, my friends.

As Above, So Below is an inconsistent bitch at best, often in heat for mating season but just as often flaccid and nukeworthy from the collective metal memory. Had this been reduced to just an EP, with "Bone Crackin' Fever", "Apathy", "The Unextinguishable", and "When One Becomes Two", it would have made for a reasonable follow-up to Uncertain Future that delivered on that promise while the band gestated some new and better ideas for their own uncertain future. As it stands, the cover art is not all that is ugly about this music, and though the band would somehow manage to rattle off an independent, shortform release some years later, this was the true death of their once bright ambitions.