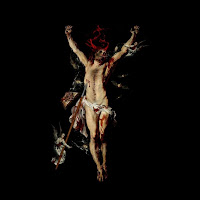 Along with the more experimental Havohej, Profanatica has long been one of the primary vehicles for American cult musician Paul Ledney. Though the project was assembled 20 years ago, there was a near decade of silence on this front. Only in recent years has Ledney got around to releasing this aural sacrilege in proper album format, first with the Profanatitas de Domonatia debut in 2007, and now with its not so subtly titled successor Disgusting Blasphemies Against God. However, the style remains quite the same, with a slightly more thundering bass in the mix, but a similar scatological black humor to its ten raging acts of theological incineration.

I'll point out that you might not want to listen to this sophomore at full blast unless you are planning an end of days party, because its violent and raucous, noisy and loud to the degree that you will develop a raging headache within a handful of tracks if you're not prepared for the onslaught about to manifest through your speakers or headset. John Gelso's bass tone is enormous to the point of nearly digesting the entire mix, and the guitars used simply to complement this central juggernaut with bleeding lines that descend from Virgin sounds. The writing is extremely basic, and far from unique in the note selection, but these are not virtues in the sadistic abscess of Paul Ledney's imagination. Instead, he promises naught but punishment, black metal that could have been written in the dawn of humanity with primitive instruments and dinosaur bones for drum machines, great lizard skins thawed and stretched into strings for the guitars, the vocals dripping fresh kill for the tribe.

Best of all would be the pacing here. It starts off fairly fast with the unapologetic "Black Cum", and proceeds to slow to a crawl with "Pious Piece of Shit", down-pitched vocals planted directly in your cranium with a hell-spiked boot-sole. As evil as this one might seem, the album grows even darker, as if in sequence, through "Christ's Precious Blood Poisoned", which emits bass tone so goddamn similar in texture to molasses that you get stuck in it, struggling to break free before the blasted, mechanical outbreak that decapitates you where you stand. Profanatica continues to beat this drum of almost moronic, neanderthal aggression through such poetically penned public service announcements as "Smashing Religious Fucking Statues", "Fuck the Blood of the Lamb", "No Trumpet Shall Sound" and "Angel With Cock", each a primitive but poignant piece of excrement slowly roasted over the inevitable open fires of hellish ovens to which this pair of Satan's seedlings are surely bound. Of special note is the haunting "Covered in Black Shit", with a massive grinding guitar tone and disgusting vocal wrath.

You do not listen to an album such as this for its nuance or any semblance of melody, you listen to it because its one of the most evil emissions of modern man, thrusting our base instincts back a minimum of 20-30 centuries in time. Like most of Ledney's music, black metal is only the starting point. Sure, you can hear hints of primitive black, death, grind and doom forefathers in the delivery, but its elevated to such a barbaric level that it becomes a pretty unique platter of Cro-Magnon, Christ-stabbing splatter, so dour and filthy that you feel soiled just for being in the same room with the goddamn disc... There are occasions where the tracks will become somewhat redundant or repetitive, and the riffs are enormously simple though strong in atmosphere, but these are small complaints when leveled against the utter crucifixion that is Profanatica's second sacrifice to the lords of the pit.