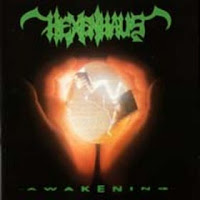 Despite their parent genre hanging over the edge of the abyss by the time it would see the light of creation, Hexenhaus' third album Awakening retains the general quality of its predecessors, but also starts to explore new territory due to the addition of yet another new front man in Thomas Lyon, who had been kicking around for years in an obscure Swedish thrash outfit called Hatred. Lyon has a higher pitched, wavering voice distinct from his predecessors Tommie Agrippa and Nick Johansson, and in fact he sounds more like a John Arch of Fates Warning or Alan Tecchio of Watchtower. In fact, the entire album seems as if Mike Wead had desired to explore a more complex ground, and Awakening could be considered a solid example of progressive, technical European thrash, running in the circles of a Mekong Delta, Depressive Age, or Deathrow, or US acts Psychotic Waltz and Watchtower.

Though quite a stretch from the debut A Tribute to Insanity, Hexenhaus bear the brunt of this new direction well, and Awakening is yet another delight in their catalog to peruse, and further proof of a sound body of work that should never have been ignored by the raving tech thrash lunatics out there. The music is punchy, effective, and proficient, and as the intro "Shadows of Sleep" parts its acoustic gleanings, the title track erupts with a number of well plotted riffs on a course for the same schizophrenic madness that made one salivate over a Deception Ignored, Control and Resistance or Realm's Endless War, even if Hexenhaus are not quite so complex or bewildering in delivery. For the riff hound, there are plenty of bones to horde just in this song alone, and a superb lead sequence that cedes into dark, thrashing currents, screeches and whispers. "Betrayed (By Justice)" continues with some flowing, popping bass and wonderfully demented guitars that explode like a dynamic, melodic asylum.

Even more ambitiously, the band next lurch into the 11 minute epic "Necronomicon Ex Mortis" with a pretty large riff count of quality, and some sequences in which the synthesizer is adeptly added to create the epic atmosphere such a composition usually requires to stay fresh and inviting through its lengthy discourse. "Code 29" is a graceful, flighty instrumental which sets up the two-fisted pumping, mid-paced thrash riffs of "The Forthcoming Fall", which phase in and out of elegant power not unlike a more technical adept to Messiah Marcolin's post-Candlemass work in Memento Mori. "Sea of Blood" surges with a killer, frenetic fill riff in the verse that shifts into brilliant and savage speed metal with tiny flourishes of shred-work, and "Paradise of Pain" feels like its natural continuation, with similar guitar work. If you've enjoy the album up to this point, the remaining tracks "The Eternal Nightmare Act II" and "Incubus" will continue to titillate, cornucopias of quality and inventive riff work that draw you deeper into the band's nearly spastic madness.

Awakening is not so dire or brute as A Tribute to Insanity, and a lot more involved musically than The Edge of Eternity, but its a very natural progression. The band have not repeated themselves in the vocal chair, but they still retain enough elements of that initial savagery to bludgeon through the heightened flight of Mike Weak and Marco A. Nicosia, who manically captivate the listener with their busywork over a tight and efficient rhythm department. The mix of this record is still fairly dark, straightforward and organic like the prior albums, and by 1991, they were elevating to the top of the technical thrash/speed pool despite the rest of the genre sinking like a faulty cruise liner. There has never been enough buzz around Hexenhaus, so here is the chance to rectify that, track down their legacy and partake.