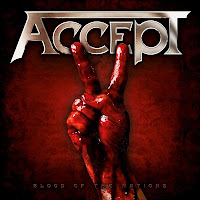 As a massive fan of Accept and Udo Dirkschneider, solo career going on 30 years, it's a difficult prospect for me to face the legendary German band without their iconic vocalist. I've tried once before, when the band released their 1989 album Eat the Heat with David Reece, and got burned, but then, I had been warned, right? Well, it's been 14 years since Accept put out the last record with Udo on the microphone, the lackluster but nonetheless fun Predator. The former front man has been maintaining his solo career with an excellent track record of material that has ranged from good to wonderful, and propelling his Brian Johnson-like air raid successfully into the power metal format. So what of the rest of Accept? Well, they've been working their way up to this.

For whatever reasons, Udo and Wolf haven't come to terms, and the band have once again reached out to a new singer, this one with a bit of history: Mark Tornillo, who was and still is a member of traditional New Jersey hard rock/metal act TT Quick. As a general tightwad and massive fan of the original Accept heyday from about 1980-1986, I was dreading this maneuver, but I have to admit, I am very relieved to plant my size 13 Sketcher sneakers right one my one into my fat head, because Tornillo has actually done a decent job with this material. This is no hack work like the hiring of Blaze Bayley to replace Bruce Dickinson, or Tim 'Tries Too Hard' Owens to replace Rob Halford. Mark Tornillo is not only decent at emulating Udo's brand of vocal mayhem, but he's got a little of his own personality, especially when he delivers in a lower, cleaner tone. Now for the million dollar question. Is he superior in any way to Udo? Fuck no, not in a million years; but let's give some credit where credit is due. The man came into a situation of massive fan bias, he stood and he delivered this record. There is a lot to be said for that.

Thus the onus of responsibility for whether or not Blood of the Nations is a keeper falls on Wolf Hoffman, and to ensure the album is in veteran hands, guitarist Herman Frank, bassist Peter Baltes and drumming madman Stefan Schwarzmann have all returned to the fold. The album is well written and benefits from a great, balanced production which highlights all of the band's traditional characteristics: mid to fast paced rockers and anthems which will have fists shaking all night. Like the U.D.O. solo work, or Saxon of the past decade, the Germans have efficiently modernized their roots mayhem to streamline with the younger power metal crowd, while never abandoning their decades old supporters. There's nothing showy or musically impressive about what Accept does here, in fact they've been dated in that arena for at least two decades, but no flash bulbs are required for this session, because it's got heart where it matters.

Most have already become familiar with the first single/video "Teutonic Terror", which is a pretty standard mid-paced power metal anthem with some simple melodic adornment that gets the head banging with its bombing bass-lines and makes for a smooth introduction to Tornillo's presence, with some 'whoa oh oh' backing vocals and a decent lead segment. This is really nothing special, but it does well to evoke the Accept we all knew and loved in the 80s, with enough modern polish to remain relevant. "The Abyss" opens with a stock slow power metal riff which will sound entirely familiar to everyone who listens to German material of its likeness, but they mix it up with a slice of mystique in the verse and a raging chorus that will sate fans of anything from U.D.O. to Grave Digger. Other standouts are the moody and atmospheric, crushing "Shades of Death" with its acoustic intro and slight orchestration; "Rolling Thunder" which is pure, hit the highway power metal; "New World Comin'", in which the buzz of the bass in the intro and slow, measured riffing remind me of 90s albums like Deathrow or Predator, if less aggressive; and the closing, epic "Bucket of Hate", a music box gone manic power metal and one of the most exciting pieces on this entire album.

The Blood of the Nations is not perfect by any means, and there are a few stock tunes here like "Pandemic" and "Time Machine" which, while not really flawed, simply drift in one of the fleshy listening ports and back out the other, but I feel like the remainder of the material is strong. The lead-in video "Teutonic Terror" turns out not to be one of the best of the bunch, but let's keep in mind that with the "Time Machine" bonus track, this is over 70 minutes of new Accept...and at least 50 minutes of that are exactly what we've all been hoping might one day happen again, a work of very solid quality. Tornillo is not as unflinchingly psychotic as his predecessor, but who the fuck really is? No one is going to replace The Man, and no one needs to. Wolf Hoffmann and his merry band have put their writing gears to the grind, their pedals to the proverbial metal and delivered a tight, focused comeback album that conjures up the strengths of Accept past, present, and with some persistence, the future. The pooch has not been screwed here; it's still wagging its virginal tail and tongue, waiting for you to pick up and toss its balls to the wall and beyond.