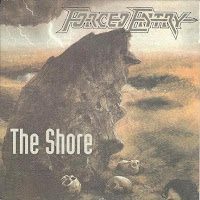 Seattle's Forced Entry had initiated some potential with their debut Uncertain Future in 1989, so it was quite a disappointment that the following As Above, So Below did not open new doors for the band, understandable due to its abject stupidity in some sequences. I'm not trying to infer that the first record was some poetic expression of brilliance, but it had this cohesive concoction of meaty, aggressive thrash ridden with quality, unique grooves that could have gotten any pit stirring. Somehow, for some reason, there were a few leftover tracks from the 1990-91 sessions in recording the Relativity sophomore album, and despite the label (and Combat) folding and dumping almost all their metal and hardcore bands, including Forced Entry, this became a good idea down the line to release on some tiny, independent entity.

Essentially, The Shore is a set of four tracks that were not good enough to include on As Above, So Below, which was already not a 'good' album beyond a few moments. I'm struggling as I listen through this to determine whether these tracks would have worked more favorable as a part of the full-length had they replaced "We're Dicks" and "How We Spent Our Summer Vacation", two of the most awkward and retarded slug-offs of any crass thrash brats in history. I'd have to cite that this is indeed only an outside possibility, but only because two of the tracks here are mediocre rather than fucking humiliation of the lowest order. The production is obviously a little more murky, but the bass tones are loud and the material does give the impression of some overcast, dull coastal region with lots of garbage strewn about it.

"Miasma" is a slowly mutating series of chugging rhythms over which the band's deep Hetfield stylisms reign, and I suppose it is somewhat successful at developing a predictable momentum. But really, anyone with a guitar, amp and ability to palm mute could write this in 30 seconds, so its far from impressive, and despite the lead and thick, popping bass below it, its all too easily forgotten. The brief acoustic bliss that inaugurates "Sore" is welcome, but the riffs are simply not all that impressive either. Once again, you get some adequate lead guitar but nothing connecting it at any point on the map. "Soul Train" is like a plebeian thrash piece with even a 'soul' sample inside it, a seething, stupefied mess of no potential, and "Licking My Wound" thinks it can make up for the rest of the EPs failure to launch with some sliding bass coils and funky wailing guitars. Well, it doesn't.

If you want any evidence of why thrash as a reliable form of aggressive release was dead by the 90s, listen to The Shore, which provides an ample education on the neglect of the genre by its own artisans. Instead of progression, thundering riff sequences and lyrics and vocals to die for, this is more of a laid back, phoned in homage to the mere act of plugging in an instrument and using minimal effort to simply fill space. "Miasma" and "Sore" might have sufficed on the full-length in place of the weakest numbers, but neither is good, and the other songs here are about as musically qualified as your last excrement excursion to the local piss parlor. The Shore is just shy of 20 minutes, but that is 20 minutes you could spend mowing the lawn, cutting out coupons from the newspaper or something else equally exciting but more valuable to your life. Fuck this.