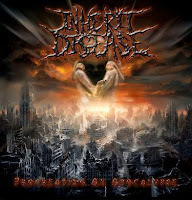 What is it about guttural frog-like vocals and pig squeal guitars that constantly draw our attention back to the landscape of stagnant, festering bodies of both men and titans that congests the endless, overdeveloped landscape of the modern death metal genre? Surely these conventions have become ripe to burst with the mold of their transgressions, eschewing nothing more than boredom to the ear that has been on the 'catcher' end of the relationship since the brutality of a Suffocation or Cannibal Corpse at the dawn of the 90s. Well, the California act Inherit Disease could not quite answer this question with their 2006 debut Procreating an Apocalypse, preferring rather to simply go with the flow and develop their metered carnage ever slowly across its 32 minute creation of carnage.

I didn't care much for this album when I first heard it years ago, and to be honest, my feelings today have not adapted strongly towards the favorable, having now been exposed to their recent sophomore opus Visceral Transcendence which ruptures this release with enhanced rhythmic compensation, brighter splatter and far better vocals, but Procreating an Apocalypse at least serves as a standard, inoffensive exercise in the patterns developed by acts like Suffocation, Deeds of Flesh, Severe Torture, Disgorge, and the like. Extremely fast based, percussive riffing dominates the big picture, but the band are constantly inserting dynamic breaks without descending into fuckwit slam stupidity, so they've got that much in their favor. The production for this debut was quite level, the hammering of the riffs and drums well matched to the alpha male toad guttural spew being hurled across its taut surface.

This is one of those pseudo-intelligent bands who are interested in expanding their vocabulary, to the benefit of us all (being spared the redundant layman rape and gore of many genre peers), this we have songs titled "Dementia Cephalus", "Catathymic Rage", "Dissimulate Invalidity" and my favorite "Imprisoned and Afflicted by Aberration". I admit there were a small handful of words I felt compelled to look up, and I actually appreciate that. Musically, the band is nearly as sharp as their lyrical strategy, with a number of twists and turns that celebrate the tradition of bludgeoning, forceful death momentum akin to fellow Californians Severed Savior or Sepsism. The band likes to flesh out its rhythmic sense through "Myiasis", punching bass and scattered, splattered sequences of controlled mute mutations that are ever arching and descending through the band's futurist, nihilistic bent.

It's all very level, and the performances are all around adequate. It fits like a glove to the Unique Leader roster. The vocals do tend towards the monotonous, but this is expected within the genre, as not everyone can channel a Lord Worm the first time out. As a series of punishing platitudes, there is much potential within the Inherit Disease camp that seems to not yet be implemented to efficiency, or truly exploited beyond the level of competent exhibition here. Quickly I became tired with the record, not for its lack of effort but for its lack of real menace. When lucky, a dark and gripping riff might manifest once in a particular track, like the closing moment of "Procreating an Apocalypse" itself, but the rest falters in comparison, the stringent kicking about of ideas that lock in step like a child who follows his Lego kit blueprints to perfection, but has not yet discovered his inherent love for the process of tinkering them into the final product. In context to their recent, praiseworthy addition to the pantheon of rupturing tech death, I can appreciate Procreating an Apocalypse slightly more than my initial exposure, but its not essential unless you truly seek out any and all examples of this archetypal Californian slaughter-surge.