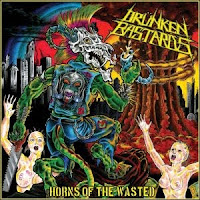 Mutant boobies and saw-wielding reptilian skull-faced punks aside, the Drünken Bastards are not in the market to provide much in the way of novelty. Instead, the Hungarians have grafted themselves to an early brand of thrash metal with heavy influences from the punk genre. I've seen the band described as thrash with black components, but that is clearly not the case on this sophomore Horns of the Wasted. No, the vocals seem more like a spin on the old splatter/thrash formula used by Mike Dean on the Corrosion of Conformity album Animosity, or The Accüsed of old. This is actually rather welcome, and my favorite element of the band's sound, but no surprise, as vocalist Blizzard is also a member of other cryptic metal acts like Dög and Vorkuta.

As for the riffing, it conjures up a parallel to the American band Toxic Holocaust, or Japanese peers Abigail and Barbatos for its mix of classic old school punk metal fury with excursions to a slightly more precise level of complexity ala Municipal Waste. You'll also pick out individual riffs that resemble Mötorhead, Voivod, Sex Pistols, etc, and I'm sure these were a huge influence here, though the band doesn't sound too much the clone of any one predecessor. The album has been mixed well enough to create a retro appeal without abandoning any clarity, and the guitars in particular have a good thickness to them that complements the vocal vomit being hurled above them, while the drums cruise along like a nuclear skate park and the bass is loud and proud to be thumping about the basic guitar patterns.

Horns of the Wasted is a short record, under 20 minutes, and this includes two cover tracks and an intro piece, so there is not a lot of meat on the radioactive skeleton. A few of the tracks, like the straight raging punk "Posercrusher", the Kill 'Em All goes punk "Alcoholic Big Tits" and "Drink With Satan", which sheds its own driving punk in the bridge for a fairly tasty speed metal lick, have already appeared on the band's 2007 debut album Posercrusher, but since that was a hugely limited run, most have probably never heard them. Still, this does seem to cheapen the overall value of the release. The covers include a pretty smooth rendition of Barbatos "Prophecy of the Evening Star", which is sadly one of the most impressive tracks on this album, rooted in pure street-ready NWOBHM; and Eat My Fuk's streaming "Destroy the Factory", which feels like an earlier Bad Religion track slathered in Blizzard's puking upgrade to the vocals.

Outside of these four, you've only got three other tracks, one of which is the intro "Nuclear Era", which is half-way funny if you're into the sounds of mutant drugged cannibals and strange cult genre samples. Then there are two pieces which appeared on the band's Global Nuclearism split with Mexicans Rötten from 2009. "Toxic Patrol" features a loud, throbbing bass over some acceptable but average thrash riffing. The melodic bridge guitars are a nice touch, but ultimately it doesn't feel as if much work went into the actual formation of the notes, it's just one of those riffs you can compose in minutes and has probably been written and recorded a few hundred times in the past. "Baptized in Speed and Blood" is a good old, dirty digging thrash street tune ready for fist fighting, but it too is not exactly loaded to the brim with memorable riffing.

Obviously, if you're one of the few people who has managed to collect the Hungarian band's previous output, you're not getting anything impressive here at all, but the way the songs all come together is pretty flush. If you can shut your mind off, its also fun for a short time. I like the use of these vocals and encourage them, but I would have enjoyed them more over a far better selection of riffs. Drünken Bastards seem as if they're probably not too serious, I mean they have a song called "Alcoholic Big Tits", and Horns of the Wasted is simply not to be taken as anything more than a boys' night out, 20 minutes gone in a flash of testicular excess. It doesn't disown or dishonor its influences, but it also doesn't really live up to them in terms of quality songs or provide more than a bare minimum of entertainment.

Posted by autothrall at 8:30 AM