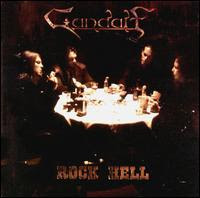 Finland's Gandalf were on to a winning formula with the 1998 debut album Deadly Fairytales, but it did not stir up enough buzz to really matter, so it became clear that some further tweaking would be necessary for them to shove past the fringe and take their part of the exploding Finnish melodic death scene being dominated by Children of Bodom, Kalmah and others. Thus, the band decided to get a little edgier than the debut, without really changing up the style, and Rock Hell was born. The lyrics had become edgier, the vocals a dash more malicious, and as the name and logo of the album title would hint, there is an increased influence of the pure hard rock within the compositions.

Still, it's hardly pure 'rock' music, and in fact seems like a half-breed of In Flames/Night in Gales using both rasped, Kreator-like vocals and some clean back-ups. The riffing is just as melodic as found on Deadly Fairytales, but if anything there are more visceral, pummeling breaks in songs like "Dead Man's Hand". The musical proficiency is about the same level, but at least they try some more dynamic approaches to the songwriting, whereas the debut was very much a flat plain in its intentions. There's just a nick more emotion on parade here, and that helps Rock Hell surpass the debut on most levels, if only by an inch or two on the cock & balls comparison ruler.

The deeper one ventures into Rock Hell, the more surprises and delights one will find. "Human Value Zero" thrives off a killer, simple melodic hook during the vocal verses, while "Geysir" seems like a 70s hard rock act trying their hand at melodic death, with dire but catchy guitar melodies and soothing clean vocals. "Live to Suffer" is highly atmospheric and rocky despite its very simple riffs, and Jari's thick rasping truly interacts with the subtle ambient line hanging just below the melody. But despite the rock injection, you've still got a track in the depths like a "Nightderanger" which is for the most part straight thrash until the bridge, then transforming into some sweet leads. "One More for the Dead" is like In Flames with a pinch of hard/groove metal seasoning like Down or Cathedral, and "The Dragon" swells with some 80s horror synthesizer lines before it becomes an emotional melodeath rager. If you're seeking something even more mellow, "Morning Sun" is quite a good rocker not unlike Taneli Jarva's band The Black League.

I admit to having quite some fun with this record, and was very excited that the band had not gone extinct after the debut, though they would disband the year after this released, moving on to form The Scourger or partake in other bands like Lullacry and Korpiklaani. While I liked Deadly Fairytales, this stands out just enough to be the superior of their efforts, even though it shucks a little of the pure melodeath feel of that effort to incorporate the band's love of hard, bluesy rock & roll. There's simply an increase of passion and fire here that will have the heads banging harder and the whiskey bottles drained all the faster, and its an adequate go-to record if you want something to rage out to without any need to listen twice or more within a certain time frame. Worth checking out if you like Sweden's Hearse, Finns The Black League, or perhaps even the later, driving Gothic rock sounds of Greece's Nightfall.