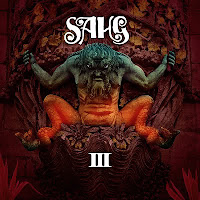 The Scandinavian territories have ever excelled in the art of doom delivery, with a number of the genre's best post-Sabbath acts arriving from Sweden: Candlemass, Count Raven, and the recent and exciting Hellfueled or Grand Magus among them. Neighbors Norway have not been quite so productive in this field, but Sahg seeks to end this with their third and most potent offering, a stout and tempered ritual that recalls traces of both Dio and Ozzy era Sabbath, Deep Purple as much as it honors the more contemporary work of a Trouble, Gates of Slumber, St. Vitus or Spiritual Beggars with a superb elixir of classic doom/heavy metal virtues that will quite possibly rock your goddamn knees down into the worship position.

Sahg are a doom metal band, but they are not often slow, and they exhibit none of the purely passive, boring elements that many often mistake for heaviness in certain other bands. The hard rock/NWOBHM stylings that thrive below Olav Iversen's cutting vocals provide a consistent stream of head banging fun, and though the riffing patterns will often verge on the familiar, they are so well produced, glazed in organs and honeyed menace glisten as they drown you into bludgeoning sonic mass. If you find yourself even remotely interested in the sounds of a Grand Magus, World Below, Spiritual Beggars or the more accessible Hellfueled, this is at least mandatory to hear, if not own.

A cautionary acoustic piece "In Through the Eye" heralds the crashing low end chords of "Baptism of Fire", soon elevated through Iversen's vocals to a scorched majesty. A number of tracks move at this rock hard, clobbering pace like "Burden", "Denier", "Mortify" and the great "Hollow Mountain", but the band can also slow the proceedings for a highly effective, atmospheric number such as "Mother's Revenge", the moody "Shadow Monument" or the desolate, sinister underpinnings of the finale, "Spiritual Void". Through all of the record's 42 minutes, the leads and vocals are well written, the dynamic shifts careful like a coiled snake, ready and willing to strike. Also of note would be the bass performance of Tom Cato Visnes (you know and either love/hate him as 'King' from Ov Hell, Gorgoroth, and I) which maintains a far greater presence than his other projects, as its given ample space to resonant.

III is every bit as traditional as it is modern, and surpasses the first two efforts with ease. The songwriting has come forward a few steps, and the vocal presence of Iversen has truly settled into the thick fiber of the grooves. This is not the depressing category of doom that will inspire much in the way of sadness; its the furious branch that will inspire only passion as it comes crashing down the boughs of the World Tree from which this band's lineage so closely flows. It's as apologetic as a muscle car, flames adorning a deep cheery finish, cruising down a highway while the bell-bottomed sweethearts stare on in fascination, a vortex where the 70s and 'oughts compress and collide and only the rock survives.