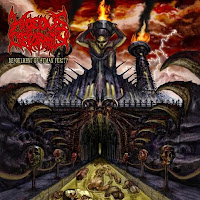 Technical death metal is perhaps one of the most difficult forms of music to truly balance. If you lean too far in one direction, you'll end up with a labyrinth of self-indulgence and poor songwriting that does nothing except appeal to the instant gratification of sycophantic mush for brains who will have forgotten it by the following Tuesday. If you lean too far back, then you run the risk of alienating yourselves from the brutes that cough up their coin for these types of releases, who will cite you 'not brutal enough'. Hideous Deformity, one of Norway's newer death metal entries, is an interesting specimen, because they manage to sound technical and brutal simultaneously without incessant walls of sweeping garbage and parlor trickery that many other bands pushing the envelope use to not actually force any boundary whatsoever, but to show off their alpha male musicianship skills.

Defoulment of Human Purity is fast, really fucking fast, and it's undoubtedly going to appeal to a wide range of death metal fans, from those who appreciate the tactile, USDM element found in bands like Severed Savior, Suffocation (on speed), Deeds of Flesh, Sepsism and early Cryptopsy among a great number of others, combined with a little of the brute blasting force of Brazilian style jiu-jitsu death like Krisiun, Ancestral Malediction, and so forth. The riffs come very quickly in rapid transitions that jump around the fretboard, almost like a hyper brand of thrash with guttural vocals, but the band rarely if ever resorts to dull wailing or the pandering shred excess. The drumming is an inhuman storm provided by guest Darren Cesca, who has performed in a number of US bands including Arsis, Pillory, Goratory, Vile and so on; and the session bass is provided by Erlend Caspersen of Blood Red Throne, etc. These two complement the core of grunter Jørgen and guitarist Robin, and together the quartet trample the listener like a herd of rocket-fueled elephants.

Seriously, do not try headbanging to this, because your neck cannot keep pace and soon your skull will roll off your shoulders and your spirit may vacate your body. Just sit and marvel at the precision patterns of virulent death/thrashing, as if you were popping speed and acid together while you watched a snuff film starring nude trapeze artists. The actual riffing elements themselves are not wholly original, drawn from a large number of influences (including some I listed before), but there are simply so many of them, and so many that are decent quality, that you're going to enjoy yourself regardless. Personal picks include "Asphyxiated by Humanity", "Deviant Manifestation" and the ever-shifting, pulverizing of "Exhibitions of Obscurities". There is not a whole lot of atmosphere, and to an extent I wish there were, but Hideous Deformity are far more content beating you with brick after brick of 'catch me if you can', and to douse this in tons of reverb or synthesized backgrounds would probably defeat the purpose.

For what it's worth, the seven originals all deliver the goods, more or less, for the 24 minutes they last. Yes, most of the tracks range from the 3-4 minute mark, closer to the former and latter, and that's all one really requires to have his/her head twisted off by the band's explosive measures. But for a few extra points, they've included a cover of Cadaver's "Mr. Tumour's Misery" from their 1992 sophomore album ...In Pains, and it fits in rather well, though the riffs are obviously a little simpler than the originals due to their age. A nice tribute here, from a Norwegian death metal band TO a Norwegian death metal band, and rounds out the album at just under 30 minutes playtime.

Defoulment of Human Purity is definitely a good death metal effort, especially if you want something truly punishing without being wanky, but it does suffer in a few, minor areas. The vocals are bereft of much character, though not bad. This could be said of most bands in this genre playing at this level, but wouldn't it be sweet once in awhile for one of them to feature something more charismatic at the helm? Not just by tossing in some snarls, hell every death and grind band does that, but just delivering a more evil, memorable performance in the phrasing and tearing of the throat. Also, despite the tremendous amount of good riffs the band throws out, there are very few which stick to the point at which you want to immediately cycle back and replay them. Successful strings of staccato mute picking, bludgeoning banks of chords, and menacing scales abound, but very few patterns hit that next level of entertainment. In the end, Hideous Deformity have slung together a promising, pleasing debut with no shortage of brutality, cool cover art and a killer session rhythm section, but it's not exactly a day one, must-purchase effort when there are more musically memorable peers out on the same fringe of extremity.