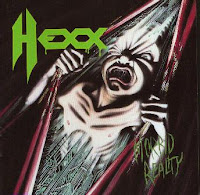 After acquiring guitarist/vocalist Clint Bower and deciding to abandon the more traditional, power metal roots of their sound from No Escape and Under the Spell, Hexx produced a pair of EPs from 1988-1990 that highlighted the band's transition into pure thrash metal which inevitably also drew forth an influence from prototypical death metal acts of the day. Where once they had flown with eagles across a phenomenal 80s landscape, they now had become just another face in the crowd of increasingly angry thrash bands trying to push a boundary. Neither Quest for Sanity nor Watery Graves found much appeal for me, since the first was full of mediocre tracks and the latter was just a couple updated tracks from the first two records, played in a heavier style, with one new piece (which also appears on this album).

Hexx got a break when Century Media, then a young label with much potential, picked the band up to produce their first full-length in the thrash field, the uneven Morbid Reality. This is a ferocious effort, knocking the piss out of the two ill-fated EP releases, and show the band finally living up to its new direction. That's not to say its a great or even very good album, because its quite forgettable, but the level of musicality and aggression are well balanced and Bower's sick vocals truly carve out a piece of your humanity as they spit and sneer across the album's eight tracks. Needless to say, this is the fastest material Hexx had ever produced, and the guitars and bass were simply off the hook, whether its Bill Peterson's manic low end presence or the nigh on constant ability of Dan Watson to shred in the midst of the swerving blitzkrieg of rhythm riffs.

Gone for good were the higher pitched vocals and elegant traditional metal influences. Morbid Reality is more of a Sadus, Holy Terror, Hellwitch, Rigor Mortis, Dark Angel or late 80s Nasty Savage than it is melodic or formulaic. Cruel sounding, competent, and more compelling than anything the band had come up with since 1986, it's 40 minutes of concentrated mayhem which feels like you've been hit by a locomotive going 10x the recommended speed. Tracks like "Birds of Prey" or "Persecution Experience" are bewildering in their ceaseless bludgeoning, with snarled and growled vocals that are well within the early death metal category. But far more interesting is the nuclear charged "Fire Mushrooms", with its use of clean, effected vocals, or the title track, which opens with low piano tones and then explodes into some of the fastest ass Bay Area thrash that could possibly have existed by 1991.

As mentioned, "Watery Graves" is present here from the prior EP, but it plugs into its surroundings rather effortlessly. The album actually closes with a "Spider Jam" that features several themes from Spider-Man shows that the band have decided to expand on. Its a nice jam and often feels like Voivod during their Dimension Hatross/Nothingface releases, though its primarily an exercise in jamming and dowsed in fluent leads. Strangely enough, it fits well enough within the album's frenetic blueprint of insanity.

If you're one to truly pine over a Swallowed in Black or Illusions, Terror and Submission or Darkness Descends, then there may be something in Morbid Reality to satisfy your rabid thrashing death impulses. It was certainly among the faster thrash/speed or thrash/death to come out of the west coast during the dawn of the 90s, but sadly the songs do not really deliver so much once you're head stops spinning around on its rested spine. Granted, this is an improvement over what they were churning out in the years post-Under the Spell, and there is some measure of promise that might have one day been fulfilled had the band continued here, but despite the energetic effort and higher visibility of their new label, this one was all too quick to fade into the background, and I can't conceive much cause to complain about that.