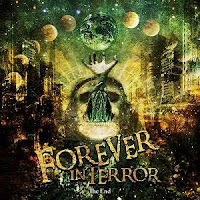 If there were any hope that Forever in Terror would somehow breakthrough and become one of the scene leaders in the New Wave of American Mallcore, residing alongside luminaries like All That Urine Stains, Shrill Bitch Engaged and As I Lay Crying, it must have been dashed out on the rocks of the shoreline when the band parted with Metal Blade records, their biggest ally and potential meal ticket in this scene. But this would not be enough to stop the young Ohio group in their tracks, because they decided to go on and release their sophomore opus The End independently, much to our relief.

Is the title of this album some sort of self-fulfilling prophecy, and am I a horrible person for crossing my fingers that this is the case? Regardless, a record label is not all that Forever in Terror have changed here. The band has honestly evolved their technical skills to a level of shred capacity far beyond the debut, and they will remind you of this with the constant noodling that preys upon your ears. It's not entirely appealing, and frankly I would rather listen to this on an Eric Johnson or Steve Vai record than a metalcore release, but its just one facet of the band's desire to make a progression in themselves, and to a degree I will actually applaud them. You see, The End sounds like the band might have been self-critical of their debut album and desired to conjure up something far more original, as if they had gotten their mitts upon some Between the Buried and Me or Protest the Hero records and decided this was the cool new wagon to saddle up and steer.

You'll notice the differences immediately in the first few tracks. "Sunlight Sands" opens like a driving melodic metal anthem sprinkled with pianos, and then punches through some taut but forgettable melodic death/thrash rhythms on its inevitable course to the breakdown. The vocals here are largely the same as the debut but fine tuned and slightly more effective. Sadly, the clean pop-punk/emo vocals are also still at work here, and they suck like a Blink 182 fan on his or her knees behind the bleachers with the scalper that got them front row seats. The music, however, is so convoluted and twisting that the listener will hardly be able to dwell on the pop elements. "Overboard" layers some Maiden-esque guitar melodies over a punishing backbone, before they erupt into total manic splatter/deathcore with constantly maneuvering guitars akin to Protest the Hero. This tune actually has a few decent seconds of mood within, though the band still hammer out a generic breakdown with more spikes of lead cutting through.

Yet, there are some tracks here even more frenzied, like "Lunar Fortress" and "Lazarus Mirror", and its interesting to hear the band as they keep coming back to the pianos to provide a more enriched, unique experience than their debut. "Until Valor" is a fairly glorious, technical conjuration with a number of well composed, clashing elements. In fact, I dare to say that if the band wasn't so determined to create a frothing frenzy of schizoid bliss through the compositions, and had actually spread some of these ideas out into sons rather than trying to cram them all in, we could have had a passable record. As it stands, The End feels like just too much going on and despite their improvements in technical proficiency, individual riff structure, and perhaps a few of the lyrical ventures, I quickly became overwhelmed with a desire to be elsewhere, listening to something else.

The End is by far the more interesting of this band's releases, and in fact if you were to skip their Restless in the Tides altogether, you would be missing absolutely nothing except a head ache and a 'told you so'. Granted, this is likely to give a headache all its own, as you are forced to listen to positive musical ideas smothered in grating, youth/deathcore vocals and an attention deficit disorder the size of Mt. Rushmore, but once again, the band proves that the further they move away from the expected conventions of this genre, the more rewarding they become.