The odds have always been staggering against the functional translation of the comic book medium into film. In the case of a sprawling literary masterwork like Watchmen, which many fans consider the greatest superhero comic book ever written, the odds are stacked doubly. I happen to fall into this camp of ravenous fandom, having read the original dozen issues upon release and several times since in its trade paperback form. After the numerous preview scenes and the casting for the film, I went into this with a little less trepidation than most. Zack Snyder worked stylistic wonders with his adaptation of the mediocre 300 into a blockbuster, so why not the Watchmen?

I'd like to state foremost that I agree with original creator Alan Moore 100% in his criticisms of Hollywood adaptations. I find them unnecessary and more often than not they stoke the pestilent flames of short attention spans and instant gratifaction. I would rather see every American blunderhead's nose planted firmly in a novel or comic than stuffing itself with popcorn at the cinema Friday night. I am tyrannical in this respect. So let it be known: you SHOULD read the original Watchmen comic book, where the story lies in its purest and smartest (and superior) form. That aside, Snyder has done a decent job with the source material. It's obvious he is a huge fan and went through painstaking strides to keep his film as loyal as possible, making alterations only where he felt they would most benefit the film. And at 163 minutes (sans an additional 30 minutes of cut scenes), Watchmen is no sitcom. It's a film which demands your patience and attention.

The casting is quite good. Patrick Wilson (Nite Owl II) and Malin Ackerman (Silk Spectre II) do a passable job in their romantic roles, but the burden of awesome falls largely on the remainder of its ensemble. Billy Crudup lives and breathes the enigmatic alien nature of Doctor Manhattan, striding through the scenes like a computer animated statue. I'll warn you in advance, there is a lot of blue dong in this film, but it did not distract me as much as some of my fellow filmgoers. Matthew Goode excels as the adonis-like figure of Adrian Veidt/Ozymandias, and Jeffrey Dean Morgan delivers the alternating tragedy and bad-assery of the Comedian. However, the proverbial cake is taken by Jackie Earle Haley as the sociopathic vigilante Rorschach. When I had first heard of this casting choice, I found it difficult to imagine the delinquent Kelly Leak from the Bad News Bears as the brutal detective anti-hero-hero, but all my doubts were quickly silenced within the first few scenes. Granted, Rorschach was always the coolest character of the series, but Haley is spot on, able to handle the masked scenes and the faux vulnerability of Walter Kovacs in prison. What a bad ass. Some of the supporting cast also shine: Matt Frewer in his brief time as Moloch the Mystic, Carla Gugino and Stephen Mchattie as the original Silk Spectre and Nite Owl, and TV actor Robert Wisden does a nice (and almost subtle) Nixon. 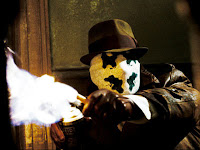 The action scenes are what you'd expect out of a movie with caped crusaders battling crime, and each other, but thankfully they do not dominate the story, which retains its heady vibe of a noir mystery with deeper implications into the fate of the world. There is no skimping of the gore here, Rorschach is just as brutal and direct in his methods as the comic. The soundtrack was unfortunately rather low-key, they did a brilliant job marketing this with Smashing Pumpkins and Phillip Glass but the actual score, while functional, produced nothing truly memorable. The use of classic rock songs throughout does work to place you into this fictional altered timeline. The set and costume designs are superb and quite loyal to the original, while skimming off a bit of that too-dated look of the series. Anachronisms are largely avoided here, for the most part you do feel like you're placed smack down in the middle of the 80s. The opening credit sequence is wonderful. Also, there a few nods to 300 here which are tasteful (a prison corridor combat sequence, a hotel room #, etc.).

As was to be expected with a project this vast, numerous liberties are taken. Details are changed and plot hooks are altered to make this all fit into Snyder's 3-hour vision. There is one massive change which all fans will notice, but it actually works here. A few of the scenes (like Rorschach's run-in with the kidnapper) lose a lot of their original power in their transition. I almost feel these could have been left alone for far greater impact. And on that subject, some of the story's best lines are not delivered with nearly the caliber of power you felt when first seeing them in print. Thankfully we'll be seeing another half hour in the director's cut, and the idea to market Tales of the Black Freighter independently as an animated, direct to DVD/Blu-Ray product (featuring 300 star Gerard Butler) was wise. Many filmgoers, in particular those peckering nitwits who haven't read the comic, would have found them too abstract here. And let's face it...the film is plenty long already.

Watchmen is not the best superhero film to date, and I'm afraid it does not ascend to the lofty bar set by it's DC predecessor The Dark Knight. Like that brilliant work, however, it's MORE than just a superhero film. The story always has been. It's not perfect, but it's quite a nice adaptation, created through a love of its source by a stylish and competent director with big visions and a lot of follow through. I am thrilled that DC/Vertigo comics properties such as these are doing so well amongst large audiences. I almost feel bad for Marvel Comics...they've garnered a lot of commercial success and their universe features some worthwhile characters, but compared to what has evolved out of the DC imprint...it's only so much juvenile tripe.

Posted by autothrall at 3:45 PM

Man, I can't wait to see this. I've read the trade paperback probably half a dozen times. Your review is encouraging, as I was getting pretty confused how the movie keeps getting anything from 5/5 to 2/5. It's probably someone either not understanding the plot, or just criticizing the director(at least one of them was pretty much about that).

People who aren't familiar with the source material may tend to enjoy the film less than those who are. So you'll see a wide range of scores.

The director had to make some changes to the story. Some of them worked, a few didn't turn out as well as he thought they would. It's similar to Lord of the Rings in that regard.

The new ending works just fine as far as I'm concerned. It works in the logic of the story. Would have liked to see a bit more of Ozy. Silk Spectre was hot as hell.

I agree with the review for the most part, although I probably would have scored it a bit higher. I'm not a guy who goes to movies over and over again, but god damn, I can't wait to see this again.

The major alteration you mentioned did fit in surprisingly well, and I almost like it better than the original, which I found pretty jarringly unrealistic initially.

Alas, to rate it higher would place it in 'epic win' territory, and I didn't feel it was that good. By comparison, the original comics were perfect and I'd probably give it a 10. I thought this would be the 2009 film I'd want to see multiple times, but I've no interest in seeing it again, at least until the DVD with extra content is released.

Also, I checked out the original Tyler Bates soundtrack (independently of the film) and it's pretty weak. Won't be doing a separate review of it.