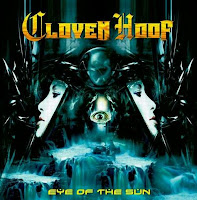 Cloven Hoof were one of the most underrated bands of the NWOBHM explosion in the early to mid-80s, notably because of their heavier and catchier take on the style than many of their peers. Albums like Cloven Hoof and Dominator are classics in their own right, but I was quite surprised when this comeback album was put together by bassist Lee Payne and a slew of new musicians (since its release, most of the session members have moved on and been replaced by various Cloven Hoof alumni). Eye of the Storm has an edge of thrash and power metal to it, essentially a modern take on the band's earlier work, but it kicks ass none the less, and if it has inspired the re-ignition of this excellent and overlooked band into the metallic bloodstream then so be it.

You will kneel before me,
I kill rob you of your sight.
Blood god
bow down humbly,
decapitation by divine right.

"Inquisitor" is a punishing, infectious metal track with its chorus just as authorative as its subject matter: vocalist Matt Moreton spins a nice sneer on his lines which remind one of the best of Vicious Rumors or Helstar. "Eye of the Sun" dials back the pace to a catchy and fist pumping riff, Moreton's vocals soaring across the verse until the pure NWOBHM power of its chorus. "Cyberworld" (lol at every reformed or older metal band having a 'Cyber-something' song title) has a flowing, hard rocking melody through the verse. "Kiss of Evil" begins with a bluesy burning lead and proceeds to fist pump through another killer hook. Great vocals here. "Eye of the Zombie" introduces a little low end groove, reminscent of Zakk Wylde or Alice in Chains and sadly not one of the better tracks (though it doesn't suck). "Absolute Power" returns to a pumping slower thrash riff and "Whore of Babylon" is simply one of the best tracks here with its curvy hooks. "Golgotha" erupts from an acoustic lead-in, into searing power metal. "King for a Day" is bluesy and groovy but again, balls-out metal beneath Moreton's shining tone. The album ends with "Angels in Hell", featuring a great symphonic/acoustic intro and some sick riffing and biblical apocalyptic lyrics.

The mix is superb, all tones are bright, audible bass, great drumming and leads, but the real star is the vocal performance. I'm hoping the musicians who recorded this but didn't remain with the band will put something together, because they definitely rose to the challenge of helping resurrect this band. Eye of the Sun kicks some ass of its own accord, and I hope the band can produce a few more like it rather than disappear again.