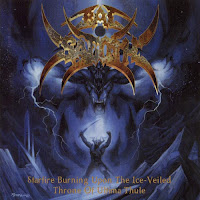 Bal-Sagoth are proof positive that if you're going to go out on a limb and do something ridiculous, do it right. Go all fucking out. To achieve this end they have evolved away from the more purely black/death influenced sound of their debut A Black Moon Broods Over Lemuria into an epic, symphonic fantasy metal style alternating between snarling vocals and melodic black riffs to pompous narration and charging power. Add to this potent mix the fantastic lyrical vomit of 'Lord Byron', which is essentially an absurd amalgam of H.P. Lovecraft's Mythos, Robert E. Howard's barbaric fantasy, and many other archaic fantasy tropes. The band is also characterized by their use of humorously excessive song titles.

Starfire Burning Upon the Ice-Viled Throne of Ultima Thule is not the best of Bal-Sagoth's forays into the epic and obscure, but it is the match which sparked off the inferno to come. It remains enjoyable to this day and there is a particular timelessness to this band's style: they are always worth a laugh. Several of my gaming friends and I use them as the go-to for a night of drunken dork debauchery. As par for the course, the album begins with a symphonic synthesizer prologue, "Black Dragons Soar Above the Mountain of Shadows", a pompous track all on its own which lets you know you're in for a hybrid of carousel music and a Dungeons & Dragons campaign gone horribly wrong (or horribly right, if you're on the level). "To Dethrone the Witch-Queen of Mytos K'unn (The Legend of the Battle of Blackhelm Vale)" bursts forth with some winding symphonic black metal riffs, dispersed by a plodding thrash riff saturated in Byron's manly narration. Like the song titles, the lyrics themselves are excessive to a fault, and most are narrative rather than verse.

Emboldened by their victories and the expansion of their queen's dark dominion, the hordes of Mytos K'unn began the incursion into the lands of the Northern Tribes, beginning with the grim and brooding territories south of the Snow Kingdoms... the rugged homelands of the warlike clans which had been recently united into a strong realm by the powerful warrior-king Caylen-Tor, a man known to his allies and enemies alike as the Wolf of the North.

Who are these fucking people? The album continues with the windy mystique and fluttering keyboards of "As the Vortex Illumines the Crystalline Walls of Kor-Avul-Thaa", which features a great and familiar sounding march/bridge. The title track opens with a chugging gait, shortly replaced by lavish synth as Byron dictates 'The Final Part of Voryn Helmsmiter's Journey to the Ice Realm'. "Journey to the Isle of Mists (Over the Moonless Depths of Night-Dark Seas)" is another sweeping, glorious instrumental with some amazing synthwork. Jonny Maudling is a true talent on the piano/keys and if he hasn't already starting scoring films, well isn't it about time? "The Splendour of a Thousand Swords Gleaming Beneath the Blazon of the Hyperborean Empire" is the first of a multi-part saga which will continue on later albums, a rousing war metal piece featuring the barbarian snarling and epic carousel motif to its fullest.

Assassins stalk the nighted halls of my palace... poisoned blades and chalices surround me.
I thirsted for a balm, but my thirst was slaked by an envenomed draught.
My swordarm shackled by tendrils of sloth... enthralled by the chasmed gloom...
Borne upon wings of labyrinthine dread... I awaken!
I shall seek the counsel of the sorcerer, keeper of the ancient scrolls of wisdom, and the Crystals of Power...

The rest of the tracks basically follow suit, but I'm not sure I have it within me to continue battering you over the head with this wall of text. "In the Raven-Haunted Forests of Darkenhold, Where Shadows Reign and the Hues of Sunlight Never Dance" is one of my favorite tracks on the album, and the morose keys of the closer "At the Altar of the Dreaming Gods" are likewise lush and delicious.

Strangely, it's the sort of album towards which my appreciation has only grown. My first response to this band, I'll admit, was that they were ridiculous, overhyped and stupid. But then it struck me...my criticism was largely bourne of my own self-serving seriousness, which prevented any true appreciation for the masterful irony this band had created in a stagnant metal economy. It's a hilarious album which also serves you a super sized portion of quality symphonic metal. If I were to once again review this in...say...5-10 years, the score may grow even higher. It's one of those types of records, so neglect this at your own risk!