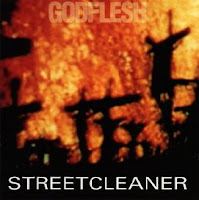 The irony is that the world is still not ready for the blend of sludge spewing industrial destruction Justin Broadrick, Ben Green and Paul Neville were cranking out 20 years ago. Having emerged among the diverse landscape of Earache pioneers like Carcass, Bolt Thrower, and Napalm Death, they were one of the first of these bands to make some headway into the filthy crossover masses of rivet heads, metallions and grinders. Sophomore album Streetcleaner remains my clear favorite of their recorded output, yet, like most of their material, it doesn't fully stand the test of time. Dulled expectations and accolades aside, it is still quite a damn impressive effort.

You don't have to listen very far to figure out why. Streetcleaner introduces itself through the best pair of Godflesh songs you'll ever hear, repetetive and frightening anthems with a lyrical bludgeoning so primal and perfect that you are forever branded. It all begins with a simple poem:

Not to be undone, second track "Christbait Rising" is likewise a hypnotic foray into the shuffle of primitive electronic drums, fudging bass lines and droning guitars. The vocals echo forth in a tribal pattern of pain dynamics. The rest of the album has its work cut out for it, and while it largely succeeds, the remainder of its tracks don't quite live up to the first two. Still, you have the back alley desolation of "Locust Furnace", the sparsely percussive and frightening "Mighty Trust Krusher", and the plodding sewer sludge of "Life is Easy". There was a slight resemblance in disposition towards Americans Prong at this stage, another band who also took their inspiration from the rot and ennui of the urban labyrinth.

Streetcleaner still sounds pretty good to this day, and you can hear the major influence the album had on the sludge/drone scene which started gaining some mileage in the 21st century. This is a dark and disturbing work, the band would save their silver linings (i.e. melodies) for later efforts, which increasingly swerved away from this early direction. Whether you're longing for that Earache records nostalgia or just want a pretty 'eavy trip, the album should suit you.