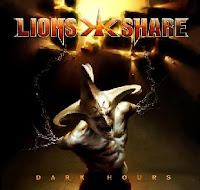 Lions Share have been around for quite some time; Dark Hours is their sixth album and as the title suggests it is perhaps their heaviest yet. Nils Patrick Johansson handles the vocal duties once again on this album, and his style is more aggressive than what you might be used to hearing him with Wuthering Heights.

The band takes no time in leveling the field with a quick and angry number "Judas Must Die". Prepare for heavy metal warfare as Lars Christmansson's speed metal riffs provide a mean counterpoint to the sneer of Johansson's vocals. A music box sample provides a brief interlude before "Phantom Rider" rocks you to the toes, still maintaining that wicked edge the band have carved out for this offering. "Demon in Your Mind" makes the first prominent use of the keyboards within the verse, but it still burns along with a hellbound groove. "Heavy Cross to Bear" slows things down with some bluesier, ballsy metal riffing. "The Bottomless Pit" once again returns to rock your face with its burning yet simple rhythm, breaking into some creepy acoustics, bass, and an electronic drum beat during the verse. Other ragers on the album include "Full Metal Jacket" and "Napalm Nights", but on the whole the album rocks pretty hard.

This is a fairly welcome change since many bands just get more mellow with age. Dark Hours is quite the opposite, there is a vital energy in its grim subtext which shows the band furthering its own extremity without taking a copout and just playing death or black metal or something. You won't hear trendy and unecessary metalcore growls, just pure power metal with some nice interludes. It takes only a single listen through to appreciate what these seasoned hands can bring to the table, especially if you the classic heavy metal traits: dark, melodic, catchy and mean. This is probably one of the better Lions Share albums I've heard and I hope they'll continue along this direction.