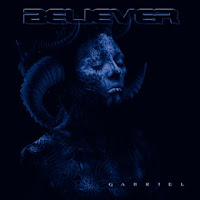 The list of quality Christian metal bands in the course of metal's history is not long, especially when it comes to the more 'extreme' incarnations of the form (thrash, death, etc). Pennsylvania's Believer are one of the few respectable bands to truly break this mold. Their lyrics have hinted at their convictions without becoming preachy in tone and treating the listener like an imbecile. They are capable of abstraction and intelligence.

Believer produced a pair of pretty good albums in the 20th century: the technical thrashing of Sanity Obscure and the more experimental Dimensions. It's now been 16 years since their last full-length, and for this 4th album they return to the thrash with a progressive influence manifested in the use of synthesizers, adventurous leads and riffs. The band seems to have hardly skipped a beat, and Gabriel is possibly their best effort yet. "Medwton" combines tech thrashing riffing ala some of the late 80s/90s best with hints of chant and Kurt Bachman's venomous vocal delivery. "A Moment in Prime" features some slower grooves with dense bass and spurious sound effects that almost transmute you into another dimension. "Stoned" uses some interesting, swinging riffs and effects. Other great tunes include the pensive and vocally layered "History of Decline". The poetic and sampled progressive piece "Nonsense mediated decay". The morose and unearthly tones of "Shut Out the Sun". And the return to speed and thrash of "Focused Lethality" in which the band intones:

Not so subtle there! But it rocks. The entirety of Gabriel has a nice crisp tone which recalls the tech thrash of late 80s greats like Paradox, Destruction, Mordred, etc. The leadwork is intense and the band's use of samples and effects is both complementary and effective to their conceptual style. Whether you agree with the band's message or not, this is an album worth hearing for the fan of progressive, rifftastic thrash metal. Good to see them return and good that Metal Blade has picked this up for release.