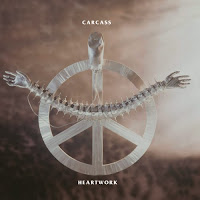 Symphony of Sickness and Necroticism provided successive evidence that Carcass were moving away from their pure goregrind roots into a structured and accessible medium of big riffs with catchy hooks. That said, I wasn't quite prepared for Heartwork, an album which remains today one of death metal's most memorable offerings and an example of a band's evolution gone proper. Upon first listening to this I had to remove my jaw from the floor and swab up all my wandering saliva. The album flawlessly combines brutality, groove, depth and proficient metal musicianship into a set of highly memorable tracks, and lyrically the band had all but abandoned their pure medical gore diatribe and not quite subtle attempts to steer you into vegetarianism (see what I did there?)

"Buried Dreams" inaugurates the album with creepy leads and a big verse melody which alternates with crunchy, simple thrash. "Carnal Forge" is one of the amazing, faster tracks of the album where the vocals start to take off, Walker's sneers at their all time high. The song has some excellent bridge riffs where catchy rhythms accent potent leadwork, all collapsing back a labyrinth of chunky winding riffs. "No Love Lost" hits straight to the gut with a wall of groove, subtly morphing into the song's verse and emo-crusher chorus:

"Heartwork" follows with an excellent, speedy intro riff before an amazing melodic lead and a thrusting, thrashing verse rhythm. "Embodiment" is a slower track with a series of excellent melodies before its slow paced moshing. "This Mortal Coil" quickens the pace once, yet more intense melodies, though the real power here is the Maiden-esque melodic gallup of the bridge. This leads to what I'd consider the best song of Carcass' career, standing out amongst even its excellent peers on this disc. "Arbeit Macht Fleisch" features some of the best riffs I have ever heard in my life. A perfect, grooving verse leads into that amazing thrash part at :52 and then the song proceeds to batter you with its brilliant selection of notes and intensity. GRIND.

Superb lyrics capture the futility of modern, repetetive lives of unhappiness through potent, nihilistic imagery. "Blind Bleeding the Blind" follows, another faster phrase with some groovy breaks and blues solos. "Doctrinal Expletives" has some more bludgeoning breakdowns amidst its steady steamroller fervor, however this is probably the weakest track on the album and partly responsible for the only 1/4 point I could ever dock it (a few of the earlier tracks get dull after time too). "Death Certificate" ends the album on a high note with some vibrant and catchy melodic riffing, though if you've got the bonus track "This is Your Life", it's also quite good and sets up the further death & roll direction the band would be taking with their next and last album, Swansong.

In addition to being a key evolutionary piece in the career of this band, Heartwork stands alongside the later Slaughter of the Soul as one of the albums to hugely influence the style we know today as melodic death metal or 'melodeath'. It seamlessly incorporates heavy metal leadwork and catchier riff structures yet remains totally brutal. The latter aspect is aided by the absolutely crushing mix here, it still sounds better than most albums released today. The leadwork courtesy of Michael Amott is extremely well constructed, and the lyrics are almost uniformly perfect.

Heartwork was, and is, a monument to quality. During that early to mid 90s period in which metal was starting to sink, this was one of the exceptions. It deserved all the accolades rained upon it and the wider distribution it had with the Columbia/Earache deal upon its release. Also: H.R. Giger sculpture on your cover makes you cool.