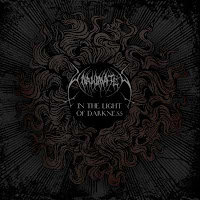 It seems the forgotten Swedish titans of the 90s continue to crawl forth from the woodwork of their celebrated scene to rekindle the early fires of black/death metal and show the new blood just how it's done. This was the case with Seance and is now also so for Unanimated. Though the band's previous albums In the Forest of the Dreaming Dead and Ancient God of Evil were cult classics of aggressive melodic death metal, they never garnered the success of a band like Dissection and fell by the wayside as the genre shifted more towards the modern crop of highly melodic death (In Flames, Dark Tranquillity) or flag-waving At the Gates clones (early Soilwork, etc). After 14 years the band returns with their third opus, and it's more than a match for either of its predecessors.

In the Light of Darkness sounds devastating, a crushing effort which offers both yearning melodies and pure Swedish death metal bordering on some blackish tendencies. The haunting instrumental intro "Ascend with the Stench of Death" serves as but a teaser for the spider weblike opening riffs and dense atmospherics that precurse "Retribution in Blood". Winding verse melodies, and a bridge riff shimmering with evil as it bears the weight of its six-string archways, declare WE HAVE RETURNED. "The Endless Beyond" opens with a creepy and beautiful melodic picking while the chords crash in like a bleak abandoned vessel upon a churning sea. "Diabolic Voices" nails the coffin with a mid-pace, explosive snarls erupt over driving blast beats and daemonic chords. The title track plods methodically forward through an array of excellent melodies to cap off the chugging mutes and slowly grinding chrods. Other tracks of note include the glorious "Enemy of the Sun", the ghastly tones of "Serpent's Curse" and the closing acoustics of "Strategia Luciferi".

The album sounds quite incredible, the chords attain molten depths while the acoustics and leads simmer and soar through the bombastic strides. The band is out in full force yet emphasis is focused solely on the crafting of atmospheric rhythms and bloodsoaked, simple aggression. In short, it's not a far cry from their previous efforts. Just resurrected and re-invigorated for the 21st century. Unanimated prove once more that they're worth your time, and this album is a no-brainer for fans of Swedish black/death metal ala Dissection, Sacramentum, etc.