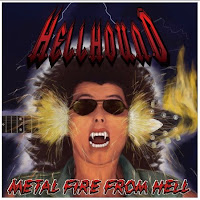 I'm often critical of humorous and idiotic retro metal bands within these pages, but occasionally an album comes along which is so beside itself with laughter, so ludicrous that I cannot resist its charms. Japan's Hellhound have released such an effort in the sequel to Tokyo Flying V Massacre. They basically mash up Rob Halford-esque screaming vocals with catchy classic speed/thrash metal, and the rest is pure enjoyment.

In keeping with tradition to this sort of self-mockery, half the song titles feature the word 'metal' in them. The album opens with the forceful title track "Metal Fire From Hell", and you'll also be introduced to the gang shouts and Udo-like rampage known as "Heavy Metal Highway", the NWOBHM flavored "Heavy Metal Education", and the filthy speed "Metal Psycho". There are other tracks as well, like the bluesy grooves of "Headcrusher" where the vocals become simply hysterical. "Too Wild to Tame" is one of the better tracks with a great old speed vibe below Crossfire's vocals. Yes, the vocalist/guitarist is named Crossfire, while the other band members have names like Swordmaster, Dragonblaster and let us not forget the other guitar player Lucifer's Heritage.

The album sounds quite old school but it's bold and crunchy, the vocals slice right through the riffs like an air raid siren. This album should appeal to fans of countrymen Metalucifer who have a similar tongue in cheek approach to their influences, if a little grimier sounding than this. The songs here are fun, the leads will have you throwing your horns in midair, and it's a little better than the debut album. Actually, you'll be throwing horns the entire time.