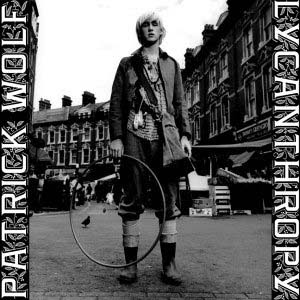 Ok, it's time for me to focus my misty fanboy eyes long enough to write about Patrick. What's so interesting about him, you say? Well, besides his gorgeous, British looks, this solo multi-instrumentalist is a huge inspiration for me, both for having left home at the age of 16 to live as a travelling violinist with various groups and for his ambiguous, free sexuality. Previous generations had Bowie - I had Patrick. Lycanthropy is his solo debut, produced after a Maison Crimineaux show garnered label attention and support for his work.

Lycanthropy stands as the most youthful of Patrick's albums, showing a wild roughness that embodies the formative calamity of his teenage years. Indeed, the songs to be found within were written over a large period of his youth and feature, more than the following two releases, a clearer look into the elements that inspired and shaped Patrick as he is today. Patrick's main expertise lies in the violin, but the piano and ukulele also play large parts in his style. Whether you look at the stirring hope to be found in "To the Lighthouse's" violin and oboe undercurrents, or the thoughtful play of "London's" simple piano accents, there is a masterful use of very different elements to create a powerful whole. Heavy bass beats and chopped snare violence culled from the changing UK electronica scene drive the songs here with a foot-stomping pulse and a youthful delight in destruction. If there was ever a good argument for the use of folktronica as a genre, this is it.

Patrick's voice and lyrics are fantastic as well. Ranging from introspection to rebellion, his distinctly British singing never hits a weak note. Backing it up are some rather refreshing themes. As Lycanthropy was his teenage album, the lyrics are suitably youthful, brash and confident, yet still vulnerable. Songs like "Wolf Song" and "A Boy Like Me" take the expected direction about standing up for one's self and enjoying life, while others are more personal. "Paris" is a recounting of how he was expelled from a school for kissing a boy, won a lawsuit against them, and bought his piano with the money he received. There's also a touch of darkness in "The Childcatcher," a song about being tied to a bed and molested as a young boy. Patrick is refreshingly personal in his content and delivery, which makes his style all the more amazing.

While I don't hold this to be his best work, Lycanthropy is still a fucking great album that anyone interested in unique indie music should look into.

http://www.myspace.com/officialpatrickwolf
Posted by is this your life? at 11:50 PM