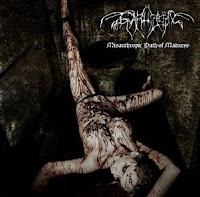 Svartjjern is a straightforward Norse black metal assault with HansFyrste (of Ragnarok) on vocals. The style here is nothing you haven't heard before if you're into bands like 1349, Nidingr or Swedish bands like Dark Funeral and Mork Gryning, but it's decent for a debut. The shift between its blasting forte and slower thrashing chug sections is pretty much guaranteed to incur some whiplash in its listeners. For the rest, there's the eyecatching, wrecked corpse of its cover snuff model, spattered in dark blood.

"Code Human" blasts forth from the crossgates of hopelessness, breaking down into a mid-paced thrasher over the steady double bass. "Ancient Shadows Revelation" continues this stream of thought with a continued double bass through its verses, picking up into some ravenous chords below HansFyrste's deep throat spew. The album's stronger numbers include the savage and thrashing "Stillborn Acolyte" with its taps and trills amidst the thrust and blast; "Passions of 7" flows like a river of bloodied grace and memory before breaking once again into the mid-paced chugging; "Finally the World Shall Shape" opens with a sinister riff worthy of vintage Slayer.

The mix is dense and dark, but all instruments cut through like sawblades, their sharp steel teeth filed perfectly by the brutal vocal delivery. Several of the songs have the same formula: blast to rolling double-bass thrash, then blast again, and so forth. This doesn't make them bad per se, but it does feel like a rehash of the same continuous idea and gets a little old. I'm more a fan of Ragnarok (and they're working on something new) but this is a decent album which should tide over fans of 1349, Myrkskog, etc until they produce some new material.