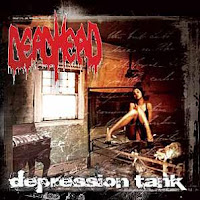 Dead Head are yet another of the myriad underrated European thrash bands to emerge during the 'Golden Era' of the genre, beginning in the mid 80s and then fizzling out in the early 90s. They held the torch a little longer than most, having just begun to issue full-lengths in 1991 with The Feast Begins at Dawn. That and Dream Deceiver were decent efforts if not instant classics, but the band has never disappeared, releasing Kill Division in 1999 and Haatland in 2005. It's really a good thing they've stuck it out, because their 5th album Depression Tank is both the best and most exciting of their career, thriving with an intensely hostile disposition most younger bands are simply incapable of.

The band sounds pissed. Most of the album moves at a single pace: full speed ahead. New vocalist Ralph de Boer isn't a far cry from his predecessor, his voice is like a menacing hybrid of Schuldiner and Schmier. "Dissolved in Purity" alternates between a Slayer-esque chug-fest and hyper rhythms below the shredding leads. "Green Angel" implants discordant chords over a frenzied start and stop blasting verse, sounds like the dead end of a crack overdose but then busts out a total 80s crossover thrash breakdown. "Cryptocynic" is incendiary. It's nearly impossible to not LOVE this track if you're a fan of Bay Area or German thrash metal in the 80s, it's thrust matched by its propensity for catchy riffs and angry vocal spew. "The Swing" is a swing at religious phallacy. And a home run. "Daemonique" features some spastic and noodly riffing along with its thrusting chords. "Firegate" has been made my new life soundtrack...a beautiful portrait of everything I've ever loved about thrash (and death) metal. The remainder of the tracks are equally violent and excellent, in particular "Nero Dies" and the punishing "Pesticide".

The mix is just as professional as you could want from a thrash album, the guitar tone is crunchy and vocals are just right: spitting hatred and virtue in the same breath. If the band's previous albums haven't cemented them into the annals of thrashistory just yet, Depression Tank will seal the deal. It's an impressive statement from an overlooked band.